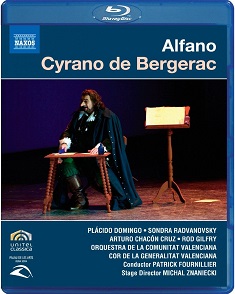 The story of Edmond Rostand’s epic romantic drama 'Cyrano de Bergerac' (1897) should be known to most audiences from the various film versions that have been made – some of them even predating Alfano’s 1937 opera – the most notable being Gérard Depardieu’s performance as the long-nosed character in Jean-Paul Rappeneau’s popular French film from 1990, but it may also be known to more through Steve Martin’s modern updating of the role in 'Roxane'. The story however is essentially the same, that of a man with an exceedingly large nose that disfigures his face, who believes that he is ugly and unworthy of the love of his beautiful cousin Roxane. Working closely to Rostand’s original text, Rappeneau’s film captured all the comedy, wit, romance and tragedy of the situation, retaining the verse format of the original, and did it so well that it’s impossible for anyone who knows and loves the film version not to measure up Franco Alfano’s opera against it. It has to be said that the opera compares very favourably, working so naturally that one wonders why it isn’t better known and more frequently performed.

Alfano, who is now only really known for the rarely performed Cyrano and for completing Puccini’s final opera Turandot after the composer’s death, only succeeds intermittently in finding the right tone and melody to engage the audience in the drama, but he is wholly convincing in the areas where it counts most – in the romantic expressions of love between Cyrano (acting on behalf of another man) and Roxane. The arias and duets that consolidate the nature of their love (“Sens to mon âme un peu dans cette ombre qui monte?” and “Je lisais, je relisais. J’étais à toi”) achieve a perfect expression of the highly florid nature of the romantic declarations and the underlying depth and sincerity of the sentiments with all the mastery of a student of Puccini. If it were just for these two arias alone, Alfano’s Cyrano de Bergerac does complete justice to the work, but there is great skill in how the essence of the story fits around it. The dramatic action is somewhat condensed in the opera but it retains all the essential qualities that make the work so charming and doesn’t lose a fraction of the emotional depth or spirit of the original.

It does so of course, because that is the great strength of opera, allowing expression of such elements through the music and the singing, and Alfano plays to these strengths. In the film version, I find Roxane comes across as somewhat bland, insipid and superficial, and you need to will a sense of disbelief to understand what inspires such passion in Cyrano apart from her beauty, but here she has a much more active role and is much better characterised, principally through the musical arrangements, and, of course through the singing. Here we have Sondra Radvanovsky, who conveys the full force of her character’s nature and passion through her singing, if not so well in her acting or facial expressions. Rod Gilfry is marvellous as De Guiche, actually almost making his character sympathetic and less of a moustache-twirling villain. Arturo Chacón Cruz is fine as Christian, but it’s a thankless role that has no real arias and is always upstaged by Cyrano. As Cyrano, you couldn’t have anyone more charismatic than Plácido Domingo. His French diction isn’t the strongest, but he has all the passion and charm that the swashbuckling hero demands and is in fine voice in his 121 role.

The staging at the Palau des Arts in Valencia is fine, striking a good balance between the period and a modern approach to staging it, without introducing any incongruous elements. The stage however is a little dark and the recording, even in High Definition on the Blu-ray, doesn’t enable you to see the detail and the overall impact of it all. The audio, even in lossless LPCM stereo and DTS HD-Master Audio 5.1, is also lacking, but mainly due to how it was recorded. The microphones are clearly far from the singers, as there is a lot of ambient noise and stage clatter, the singing sounding rather echoing, occasionally drowning out the rather thin orchestration but at other times being overwhelmed by it. For the most part however, the qualities of the singing and the music, and the opera itself are no less evident. Overall, it’s a slightly imperfect live recording, but an otherwise fine presentation and performance of an opera that really deserves to be better known.
Posted by Keris Nine at 20:10