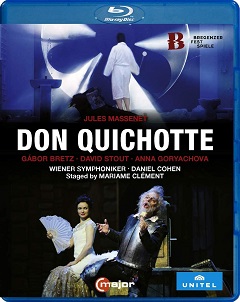 Good music is timeless of course but styles can go out of fashion, and the history of opera is lined with bodies of work by composers who have been the victim to changing trends, social upheaval and censorship. Jules Massenet is by no means a neglected or forgotten composer, but for me the majority of his work is very old fashioned and unlikely to inspire in today's opera world. There are certain exceptions - the remarkable Werther above all - and it's looking increasingly like his Don Quichotte is one of those works whose charms and qualities are proving to be timeless. Which is fortunate because that's pretty much what the opera is about.

And it's that idea that director Mariame Clément sets about demonstrating right from the outset of her 2019 Bregenz production. Even before the opera starts it's necessary to make some things clear, because as timeless as its music and themes are, the noble knight's gallant and chivalrous attitudes, his deference and respect towards beautiful women, his wooing and serenading and duelling love rivals, could be seen in a modern context as not only a little old fashioned and out of date, but even offensive by some. That just wouldn't do. Don Quichotte should leave you with that impression that he (and the opera) may be a relic of the past, but it's just a little bit sad that such ways have been left behind. Even as we respect and mourn their lack of relevance to the present day, perhaps there may even still be something to be learned from it. 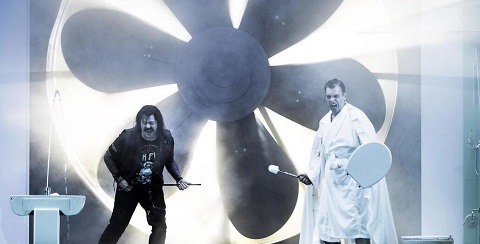 Clément's Bregenz production rather catches the audience off guard however by opening with a slick modern Gillette advertisement showing that masculine gallantry is demeaning to women and that the new man should be much more progressive and egalitarian in their outlook. The modern man would scoff at the ways of Don Quixote, his lauding of women and putting them on a pedestal, and indeed that is exactly what happens in the opening act of the opera, where it's not just some uncouth villagers mocking the old Chevalier but a couple of modern opera goers mocking these outdated ideas from an on-stage audience.

The clever, very realistic advertisement, the meta-theatrical outbursts from a planted extra in the audience and the commentary from the 'front row' are clever enough to plant the seed of the idea that is developed in the rest of the opera. Clément doesn't rest on that however but employs a few other tricks in order to retain something of the traditional presentation of the opera while viewing it at a slight modern remove. In this case of course it's an entirely valid approach, as what is lost between the innocence of the old ways and the enlightened new ways is precisely what the opera is about, and not only that, but it even describes Massenet's opera itself. 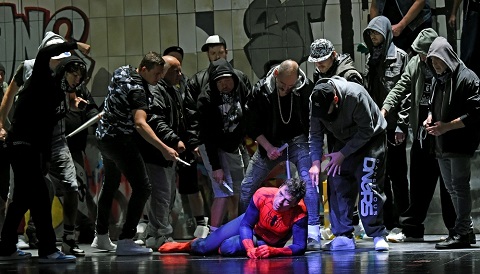 Although it's undoubtedly necessary to make the comparison, Clément risks losing the audience by using each of the acts to present a different Don Quixote in each of the Acts. In Act II, a more modern Quixote and Sancho look quite different from their classical versions, Quixote here having a groomed and shaved appearance (Gillette presumably), Panza looking like a biker with tattoos and expressing a less favourable view of womankind. The two are in the bathroom of their hotel presumably, where Don Quixote sets himself against not a windmill but an extractor fan (maybe Sancho here is his drug dealer). It doesn't make a whole lot of sense, but Clément just about gets away with it through her usual modus operandi of providing humour and spectacle, as the back wall opens up to a giant fan. More than anything however, it's the singing that provides all the necessary conviction.

The ambition of creating a Don Quixote through the ages where "we could be heroes" carries over again with no real continuity into Act III. Against a background of a graffiti covered wall in a suburban wasteland or HLM complex, Don Quixote is this time dressed - unfathomably - as Spider-Man confronting a gang of hoodlums in the 90s on his mission for Dulcinea. Act IV takes place in an office workplace with something of a Lois Lane and Clark Kent vibe about it. Any one of these ideas might have sufficient as a modernisation and provided greater consistency to the production (and opera), but it might not have established the necessary contrast between the gradual move away from the age of chivalry to the present day quite as well.

Behind it all - most evident in Massenet's score - there's a longing to believe that such heroism, romance, nobility, sincerity, pureness of heart and warmth of soul is still possible in our own time. That's blended in beautifully with the fear and sadness that Dulcinea expresses in Act V that even if it existed we probably aren't worthy of it, and as such it is scorned. The closest we have to an acceptance of heroes is that it's the stuff of movies, Dulcinea in Act V viewing the final moments of the wandering knight as if on a movie screen. Massenet handling of the underlying emotional charge of this is just beautiful, and it's all the more touching when these characters are sung as well as they are in this Bregenz production. 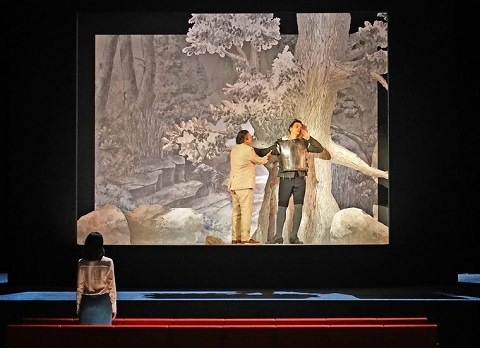 Quite simply there are superb performances across all the principal roles. Gábor Bretz is a rich, soulful Don Quichotte and he’s matched for depth and warmth of baritone timbre by David Stout’s Sancho. In voice and presence, Anna Goryachova's Dulcinea presents a worthy object for the attentions of the noble chevalier. The conductor Daniel Cohen doesn’t hold back either on the emotional richness or dramatic impact of the music, powering the Wiener Symphoniker orchestra through Massenet’s wonderful score.

The all-region compatible Blu-ray presentation of the 2019 Bregenz Don Quichotte from Unitel/C-Major is impressive. Filmed in 4K, it looks marvellous in the 1080i Blu-ray HD resolution and comes with glorious Hi-Res soundtrack mixes in PCM Stereo and DTS-HD Master Audio 5.1, both of which give the singing in particular a wonderful resonance, warmth, and clarity. The only extras are in the booklet; a detailed tracklist and synopsis, with a note on the composition of the work by Massenet and some observations on the production by Mariame Clément where she puts the variety of each act down to the lack of narrative continuity in the almost separate scenes of the opera itself.