The subject of Janáček's Věc Makropulos is definitely not a traditional one; it's a science fiction story derived from a play by Karel Čapek about a woman who has been blessed/cursed with the secret of eternal life. Science fiction and the fantastical are probably more common than you think in opera and long before the 20th century, not just in such overtly classic SF themes as Haydn's Il Mondo Della Luna, but you could even include the magical fantasy elements of such works as The Magic Flute, and Handel's Orlando and Alcina. As with literature however it's the human element that is essential, the SF or fantasy genre presenting a new prism through which to explore the limits of what makes us human. That, aligned with Janáček's modernist approach to opera offers many possibilities for The Makropulos Affair.

The most obvious theme and clearly one of the principal questions that the story explores is the human relationship to time. In a way this aligns the opera with similar themes in The Cunning Little Vixen; the need to accept the span of a lifetime as being wondrous in itself, but there comes a time when life needs to be renewed, the old making way for the new. It's not unreasonable then particularly considering Emilia Marty's profession as an opera singer who has lived down through the ages, her origins coinciding with the birth of opera, to see that idea applied to opera itself and the need for the artform to reinvent itself in order for it to have continued relevance and meaning. 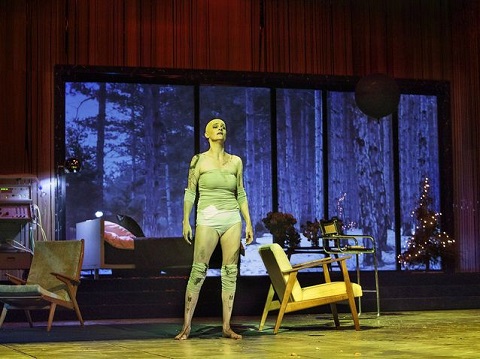 In that respect Janáček's Věc Makropulos, created in 1926, is very much a twentieth century opera, the composer also striking out for new musical ground. Here he expands on the psychological music drama of Káťa Kabanová and would take it even further in his final work From the House of the Dead, leaving behind the folk influence and conventions of his earlier works - as fresh and original as his approach to them was - and take opera in a new direction, pushing the idea of singing to follow vocal patterns, rather then vocals following musical rhythms. And yet time and timing is also a factor in Věc Makropulos, compressing a complex story with diverse characters and the relationships between them into a relatively short opera, the music measuring out its own idea of time.

If the Hungarian film director Kornél Mundruczó considers the idea of the work being representative of opera through the years, it's in pretty bad shape by the time Emilia Marty makes her appearance in this Grand Théâtre de Genève production recorded between Covid lockdowns in October 2020, with pre-recorded orchestra and chorus for social distancing reasons. She may impress young admirer Krista with her singing voice, dazzle Albert Gregor with her beauty and drive Janek Prus to distraction and suicide, but this Emilia Marty is noticeably rough around the edges, close to being on her last legs. As she removes layers of clothing, sores, stitches, weeping wounds and bandages are visible, all trying to hold her together, By the time we get to the second Act, she's connected up to an intravenous drip. 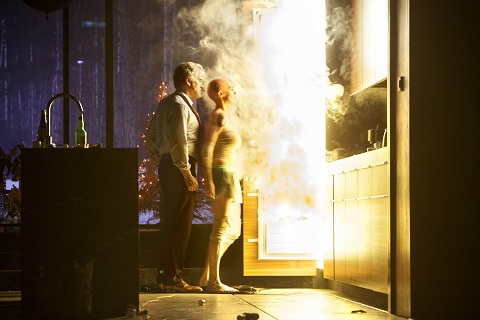 That idea of stagnating life (or opera) has been explored in other productions (Robert Carsen's Venice production made more of the theatricality aspect), but Mundruczó chooses to approach the idea of Emilia Marty or Elina Makropulos in a more open and modern context. Choosing androgyny rather than the usual beautiful femme fatale or opera diva, EM here can be seen in Janáček's opera and Čapek's story as the prototype of the enigmatic modern day rock star, like Bowie or Tida Swinton's Marianne Lane in Luca Guadagino's film A Bigger Splash, her own personality submerged behind identities and reinventions of herself, until she loses sense of her true identity and becomes a hollow shell of a person.

What way you want to look at Emilia Marty or Elina Makropulos - whether diva or rock star or movie idol - she is an ideal that can never live up to the reality, as Janek's father Prus finds out when he sleeps with her. She is in fact the personification of everybody's dream and ideal, a cipher that everyone uses as an object onto which they project their own dreams, ideals and insecurities. You can also read into that the fate of the objectification of women, EM doing what she needs to do to get by through the ages, to survive at the hands of men and their laws. For Emilia, that's borne out here also in the struggle she has to get around the ideas of inheritance that favour first-born sons, but it soon becomes clear that she has suffered in other ways through the ages.

While Mundruczó doesn't over-emphasise these themes, he allows them to become more evident by removing the second act from its theatrical setting. Act II takes place in Marty's own apartment, one carefully designed to reflect her true personality, inspired by the modernist design of Hungarian-American architect Marcel Breuer. And what consequently comes out in this production is the strength it takes to face up to who you are. By accepting the reality instead of living the dream. Life only has meaning when it is finite. True immortality, or at least a version of it, is offered to Krista, as a singer, but she refuses take the easy option. It - personality, identity - has to be earned. 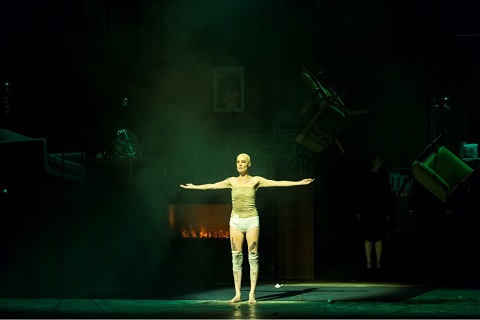 As likewise does gaining an understanding of what makes EM tick. Janáček's music goes some way to exploring the unusual psychology of Marty, who turns out to be a surprisingly modern phenomenon. Initially fragile and weak, holding no consistent musical theme or melody but just jagged pieces that do not hold comfortably together, her vocal lines strengthen towards the later part of the work, soaring to a conclusion of release or recognition. Mundruczó follows those rhythms, divesting Marty of her clothing and layers of identity until she re-enters time - the furniture and objects of the room floating in space at the moment of revelation - as she becomes truly human.

The singing performances are good, although there's a little uncertainty at first that Rachel Harnisch could carry off the role of Emilia Marty with the necessary charisma, as she is not made up to look like an ageless, timeless beauty. It's a deceptive impression - one that Janáček indeed writes as such - as she powers through to the conclusion in a state of undress. There are no concerns about Aleš Briscein, soaring and lyrical as Albert. All the performances are impressive, which is quite an achievement because Makropulos is a hugely demanding opera on performers, on musicians and on the audience. Without any intervals, the opera is still challenging and it demands total concentration to follow the implications of the court drama and psycho-drama. The rewards however are great, and with Tomáš Netopil conducting, this production holds you rapt and does lead you to consider the circumstances of the characters, and feel the weight of the challenges time and life present to them.