Director Simon Stone typically approaches Tristan und Isolde in his 2021 Aix-en-Provence Festival production with the intention of updating the opera to a more meaningful contemporary age. As wrong-headed as that might seem, since the drama - such as it is - and principal motivating force in Wagner's opera and music score takes place in a realm almost entirely outside of any physical time or place, Stone nonetheless has good form with his modern updates both in the world of opera and in the theatre. There's a complete reworking of the drama and the motivating forces behind it in this production, but Wagner's sublime music proves - as always - to be supremely capable of withstanding and supporting any number of extravagant directorial ideas and concepts.

If you want to relocate Tristan und Isolde in the present day, minus magic love potions and the forced relocation of the Queen of Ireland by sea to a forced marriage with the King of Cornwall, you do nonetheless need to replace it with something suitable and meaningful. There's a natural division in the opera between the physical reality and an idealised dream-like exploration of powerful forces that extend beyond and transcend material human boundaries. Krzysztof Warlikowski also recently exploited that division in his 2021 Munich production and for the festival at Aix, Stone proposes viewing the heightened reality as a kind of love/vengeance fantasy on the part of the disturbed mind of a wife whose husband has been unfaithful to her. Much of this is laid out in the Vorspiel and inevitably Wagner's music has a lot of weight to carry in order to establish this as any kind of viable idea to impose upon Tristan und Isolde. Witnessing her husband (Tristan) canoodling with a work colleague or friend at a dinner party in their fancy apartment, Isolde goes to bed in Act I dreaming of stormy sea with ideas of burning revenge and probably divorce raging in her dreams. Rather than drink from some arcane flask of magic potion, here at the conclusion of Act I it's a collection of prescription drugs and a cachet of cocaine in a cardboard shoe box that acts as a drug to heighten the personal turmoil of emotions going on between them.

As ever in this particular work, you need to carry this though to its conclusion to determine whether this domestic arrangement can be sustained, but it has to be said that Stone at least does establish it in spectacular fashion in Act I. You might be less inclined to go along with this idea as it is initially laid out where it not for the power of Wagner's music to scour the depths of human emotional response. It sustains the dramatic and conflicting tensions of love, hatred and desire that exists between Tristan and Isolde through to the release from any inhibiting factors to its expression at the end of the first act. There's still quite a bit to go though, and it's not easy to piece it all together into something coherent in Stone's production.

Act II abruptly takes us to an office where Isolde appears to be the manager, where the staff - in line with present circumstances - observe social distancing and mask wearing in the workplace. The day after the night before, the consequences still reverberating in Wagner's score, Tristan is shown the door with his suitcase. His reappearance in the office however leads - slightly confusingly - to a seamless flashback of the consuming love the two of them once had. To add to the complex layering of the situation and the resonances in Wagner's music, younger Tristans and Isoldes re-enact the beginning of their affair in parallel scenes during 'O sink hernieder'. It's revealed that the affair indeed started as an office romance when Isolde was already married and had a young child, the discovery of the affair breaking up her marriage.

It's not the traditional telling of the story of Tristan und Isolde by any means and it risks undermining the context and intended meaning of the drama, but it certainly touches on the underlying sentiments, if somewhat obliquely. More than that it in fact, with a vision of an elderly Isolde and Tristan in a wheelchair, it attempts to telescope the entirety of sentiments that contribute to a fully rounded and lived relationship, and encapsulate within it the depth of feeling that two people can have for one another. It's not just two people each with the own feelings but something greater that has grown between them, a love that is called Tristan AND Isolde, something that exceeds the boundaries of flesh and blood existence and can only reach its fulfilment in death. And damned if you don't feel that when it is laid out like this.

Laying it out, as simply as possible in all its complexity, is indeed the purpose of a director and Stone achieves that to a remarkable degree. It's no mean feat to match and fuse the sentiments expressed in the music and in the abstract dramatic expression of what love means, and translate that into into something relatable. For the most part, Stone makes every moment feel meaningful and prevents anything from dragging - King Marke's monologue excepted, which eludes even Stone's ability, particularly as it's difficult to figure out what this Marke's relationship is with Isolde in the layered timeline. Obviously she's his wife at this point, but after Act I it's not that clear how it has come about. On the other hand, Isolde seeing Tristan wounded by Melot at the end of Act II and attempting to take her own life seems like a thoughtful pertinent touch. 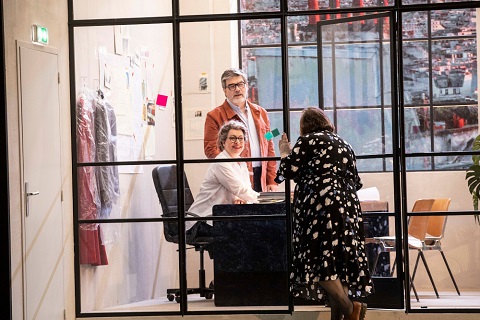 Things perhaps become clearer in Act III, showing how the latter scene was in the main a flashback interlude at a point where Isolde had left Marke for Tristan. There is a murmur in the audience as Act III opens - defying even the wildest expectations of where this might be going - on a moving train running through the Paris underground Metro line. It sure as heck wasn't going to be the usual static scene on Kareol anyway. Closer to the immediate aftermath of the Christmas party, here Tristan and Isolde are on their way to a function - or perhaps an opera  - in formal dress. Or more likely since they are heading out of the city - stopping at each of the stations on the Porte des Lilas line - just back from one. At the conclusion - major spoiler alert - Isolde catches Tristan texting his mistress and Melot defends her honour by stabbing Tristan as the passengers get off at their station.

I don't really care what justification Stone has for this, and I'm not even sure it goes against my previous belief that Tristan und Isolde is stronger when it plays out in the abstract, letting the spirit of the work and the music flow without being tied to any realistic physical realm. A subway train is both as abstract and as real as any a place for Tristan to agonise through his last moments of life, in isolation amidst the oblivious and sometimes concerned glances of the other passengers. It has a suitable air of surrealism about it, being vaguely unsettling or disorientating, as the tube of the train, authentic from the upholstery of the seats down to the graffiti tags on the wall, shuttles alone relentlessly from station to station. 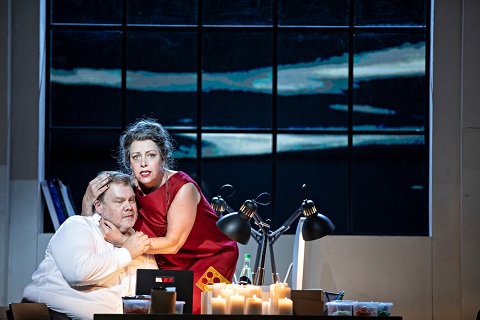 Everything that Act III needs to be however is there most critically in the performances of Stuart Skelton and Nina Stemme. While he cuts a less than heroic romantic figure than you would usually expect of a Tristan in Act I, and looks somewhat shamefaced like a naughty schoolboy at being caught out by Marke and Melot in Act II, the true depth of his feeling, his love psychosis, is felt in Skelton's powerful, deeply felt performance throughout. Freshly wounded again on the Paris Metro in Act III, what is essentially put across is a sense of deep loss and the pain of it.

Here Stone takes the liberty of reworking the Liebestod - a daring venture if nothing else for it being one of the most sublime moments ever written in all of opera, and one that really shouldn't be messed with. Replaying the devastating scene of Tristan being caught texting a lover, but this time without the stabbing, the consummation of their love in death might not be exactly the kind Wagner was aiming for, but it's immensely powerful nonetheless. Tristan has lost his Isolde and it feels like the end of the world. Utterly devastating, it manages to evoke the higher spiritual level of the work while simultaneously bringing it down to earth. You can't argue with the sincerity of intent nor the effectiveness with which that is achieved. Stemme and Skelton do their part to bring that about, but there are also tremendous performances from Jamie Barton as Brangäne, Josef Wagner as Kurwenal and Franz-Joseph Selig as Marke. Simon Rattle's conducting and the performance of the orchestra is also hard to fault.