The perspective that the present gives us on the past should be one of age and wisdom looking back on the foolish acts of youth, but all to often the view from a comfortable distance is just as untrustworthy, leading us to look back fondly and nostalgically on times that were actually painfully difficult to live through and, for better or worse, character forming. Perspective and the passing of time is very much at the heart of Tchaikovsky's Eugene Onegin, and that's the focus of Dmitri Tcherniakov's new production for the Vienna State Opera.

Always at his best when directing Russian masterpieces, Dmitri Tcherniakov alerts us to the untrustworthiness of memory and nostalgia right from the outset of this production. There are no peasants and labourers toiling in the fields singing songs that ennoble the nature of working the land. Here in the Vienna production rather we see a large family gathered around a dinner table in a room that is a comforting sea of beige ("a golden dream"), where the guests join in and make fun of Madame Larina's nostalgic reminiscences. The old harvesting songs are also romanticised and sung as a dinner party recital by Tatiana and Olga. 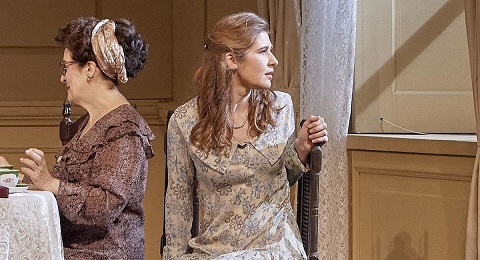 It's a frivolous world, comfortably detached from real world feelings and concerns. Even Lensky's effusive poetry to Olga here seems playful, a fond recognition of the ways of a more innocence age. No doubt the sentiments are genuine, but they are made to look out of place here. Even Madame Larina no longer retains any of the romantic novelistic illusions of her youth. This opening setting proposes diametrically opposed views of the world between the dreamer and the reality, which of course only enforces and emphasises the distance between the impressionable bookish dreamer Tatyana and the aloof, arrogant 'man of the world' Onegin.

Although that delves further into the melancholy of such sentiments expressed in the music than most, it's far from the most original observation to make about Tchaikovsky's masterpiece. The queer interpretation by Kyzysztof Warlikowski (Munich 2012), the expansive view of Russian society and culture in Stefan Herheim's production (Amsterdam, 2011), the doubling with dancers in Kasper Holten's production (Royal Opera House, 2013) autumnal moods of light and colour of Robert Carsen (The Met, 2007) all found innovative ways to tap into the many undercurrents that lie within this extraordinary opera. Tcherniakov more recently does seem to rein in indulgences and seem to play a little safer using beige-coloured living-rooms as a way to satirise the middle class, using them as a microcosm of society, but it can still be challenging and appropriate. Here the mood is intensified by the production never leaving the dining room, neither to spend the sleepless night in Tatyana's bedroom, nor even the duel scene. 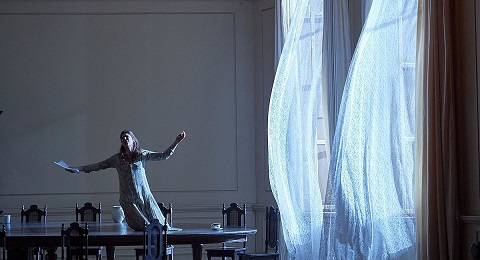 Evidently then, the more pointed commentary is revealed in other little touches and in the direction of performers, all of them contributing to emphasise the central themes. The utter sincerity of Tatyana's depth of feeling at the conclusion of the letter scene is in heartbreaking contrast to the frivolity of Onegin and all the others around her. It even seems to embody that distinctly paradoxical Russian characteristic of frivolous sincerity and sincere frivolity that lies very much at the heart of the work. Perhaps it's in that character that Tcherniakov dispenses entirely with Monsieur Triquet and instead has Lensky sing the birthday ode to Tatyana (in Russian), the party descending into sheer playful mayhem that is in complete contrast to how Tatyana is feeling. And indeed Lensky.

In this production, it seems that Lensky has an even greater shattering of illusions than Tatyana, or it can certainly seem as such when it is sung and performed with such heartfelt sincerity as it is here by Bogdan Volkov. Lensky's experience proves to be just as critical to the impact and meaning of the work as a whole when it's permitted to be (Warlikowski also for example using the quarrel between him and Onegin as a way of tapping into those deeper sentiments). Here only Tatyana understands how he feels while the others laugh and mock. The duel is no less shocking for taking place in front of all the family and friends in the dining room, reduced to a tussle over a shotgun that accidentally goes off. The impact is every bit as tragic and devastating as it ought to be in the context of this highly charged romantic masterwork.

Considered against Lensky and Tatyana, Onegin is reduced to a mockery in the opera named after him. His return to society in Act III and his self-important tale of his difficult years is met with icy disdain and casual dismissal at the high society function in another elegant dining room, this one a blaze of rich red and formality compared to the easy golden nostalgia of the Larin estate dining room. Onegin finds himself unwelcome, not some tragic romantic figure as he is in Deborah Warner's somewhat misguided 2013 Met production, and certainly not the one he thinks he is. The Russian society here is changed too, now one of ostentatious wealth where outsiders are not made comfortable, detached from their roots and the past. 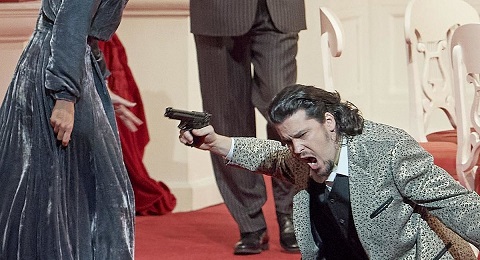 Tomáš Hanus carried much of Tchaikovsky's romantic melancholy and Russian-ness in his conducting and it was played well; a little bit broad in its sweep I felt, but the music has a lot to cover. Onegin is an inconstant man, difficult to really grasp, particularly when he is played as someone superficial and unsympathetic here. André Schuen never really convinces of any sincerity but that seems to be what Tcherniakov is aiming for here. It's only at the conclusion that he lets go and reveals or becomes aware of his true feelings and expresses everything of the ignominy of a rejected lover. It put one in mind at this time of the level of self-delusion turning to realisation of a populist US President who can't quite believe that he has been rejected by an electorate who used to hang on his every word and tweet. As mentioned earlier, Bogdan Volkov raises Lensky to a new level of importance in this opera with a heartfelt performance that is in complete contrast to Onegin.

The role of Tatyana is a difficult one, needing a singer capable of covering the range of naive youth with a more reflective mature experience. And yet, do we ever really change? Is Tatyana not the same, even after the passing of years? Doesn't she prove to be still capable of making a foolish mistake, still capable of following her heart, following a self-destructive urge and throw caution to the wind. Is she not Russian? No one is immune to such feelings at any age, as Prince Gremlin also testifies in "All men surrender to love's power". Tcherniakov recognises and so does Nicole Car, presenting a consistent vision of the romantic that lies at the heart of anyone who has seen, understood and been moved by the extraordinary beauty and sadness of life through love as its portrayed in Tchaikovsky's Eugene Onegin.