It was going to have to be different if the Salzburg Festival was going to go ahead in any form this year, but despite a reduced programme and reduced audience on account of the Covid-19 restrictions and despite a characteristically minimalist stage set for a Christof Loy production, there's nothing in the least socially distant or socially distancing about this reworked version of Mozart's Così fan tutte. In fact the 2020 Salzburg production is a very physical, tightly choreographed, condensed in its cuts and in the precision in which it gets to the heart of Mozart's extraordinary and oft misunderstood opera.

It's appropriate in this case for Così fan tutte and exactly how you want it to be, because despite all its buffo comedy elements, Da Ponte's ludicrous plotting and the libretto's seemingly superficial and clichéd characterisation, the opera is actually deeply insightful in its observations about human nature, about love, relationships, men and women, about holding illusions and facing up to reality. Far from being a light comedy, the libretto is beautifully poetic, the music deeply moving and extraordinarily expressive of a wide range of human emotions and experiences that come from heart and the head. Or it can be if it's allowed to be. 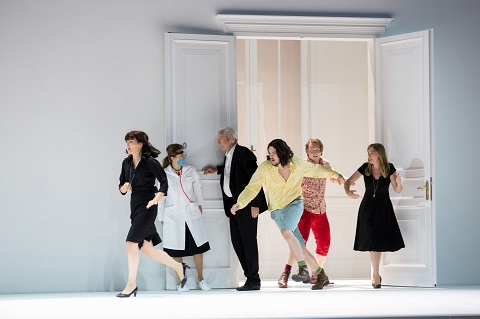 Loy's minimalist 'generic' productions tend to work well with such works, where you don't need to be distracted by the mechanics of the plot, the period or the location, and can focus on the characters and the relationships between them. It may seem obvious but that can be done physically and spacially, the distance or closeness between them the characters measured out in their proximity to one another on the stage, whether they look at each other or not, whether they touch or hold. Fiordiligi and Dorabella here are clearly close friends, comfortably tactile in each other's company. The boys Guglielmo and Ferrando are tactile in a little more rough and tumble way, playfully jostling their master, Don Alfonso, showing more eagerness to impress than feel any real feeling for their girlfriends.

Loy, who in my experience usually works with as full an uncut version of an opera as possible, takes the opportunity of working with conductor Joana Mallwitz not just to compress the opera down for health and safety reasons (reducing the time spent in the hall for the audience, with no interval where they can mingle and spread any virus contagion), but to cut back on the more buffo elements, the dialogues that might be more offensive and sexist to a modern audience. That doesn't have to be the case - Christophe Honoré managed to integrate those potentially objectionable views into a rather more questioning view of Così fan tutte and humanity in his 2016 Aix-en-Provence production - and it does occasionally make the opera feel a little too rushed here, losing a nonetheless important element while not really making the plot or motivations feel any more credible or realistic. 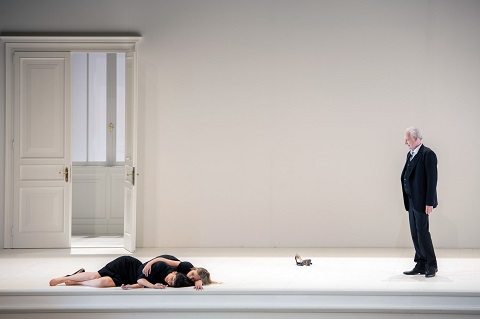 Arguably, the plot was never meant to withstand the scrutiny of realism, but the human emotions and experiences in this remarkable work are nonetheless timelessly truthful and insightful. Christof Loy and Joana Mallwitz necessarily put aside some of the more comic interludes and sacrificing this aspect of the human experience, and instead look for those moments of beauty that is brought out by what is patently and intentionally a fake situation. It's faked or contrived by its creators however precisely to evoke specific emotions in order to understand what is important. It's not hard either to see where those moments of truth and beauty are; you need to look no further than the exquisite arias, more beautiful here than any in the far more famous arias of Don Giovanni, and at least on a par with the finer moments of that other Mozart/Da Ponte masterpiece that is Le Nozze di Figaro.

The compression employed here that requires some measure of suspending disbelief actually heightens the necessity of their being a willingness to believe on the part of both sets of lovers. And what Mozart and Da Ponte achieve is indeed a school for lovers, an education on its joys, anxieties and insecurities, its feelings of deep spiritual awakening and devastating fears of betrayal. It's a bit of a crash course, achieved by sleight of hand over an intense period of a day, where you are never really sure how aware the characters are of the game they are playing or at what point reality takes over and it stops being a game. 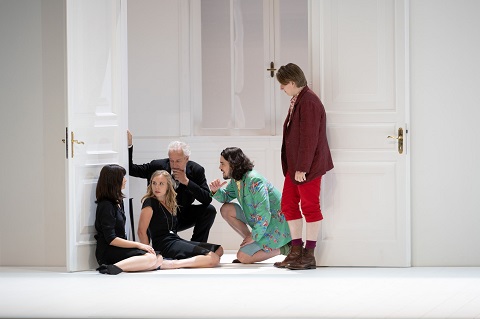 Seen that way, the opera is actually employs a post-modernist meta-behavioural effect far ahead of its time, one similar to that achieved by the late filmmaker Abbas Kiarostami in Certified Copy (2010). I don't use this example randomly, since Kiarostami directed Così fan tutte in a production at Aix-en-Provence in 2008 (that I saw subsequently at the Coliseum in 2009), which makes me wonder whether, subconsciously or otherwise, he picked up the idea from Mozart and Da Ponte and expanded on it. You can't think of Così as naturalistic - it's ridiculous and silly, and yet everything about it is beautiful, achingly beautiful and right. It's completely authentic and makes perfect sense on a deep emotional and human level, on "how quickly a heart can change".

It's been a tough year for the arts, but there's a reminder here that we can't afford to lose or fail to nurture the kind of talent that is evident on the stages of Salzburg and mirrored on stages across the world. Like the Salzburg Elektra, the talent here is world class, as good as any classic historical performance of these works, and don't let anyone tell you otherwise. Marianne Crebassa in particular is just outstanding here as Dorabella. Elsa Dreisig brings that dreamy sincere youthful idealism to Flordiligi and there is plenty of youthful enthusiasm in the performances of André Schuen and Bogdan Volkov. Lea Desandre is a bright and entertaining Despina and Johannes Martin Kränzle an ideal Don Alfonso, charmingly mischievous with just a hint of a sinister motive. Much of the secret of making these characters work and come alive is just sheer nerve and enthusiasm, putting cynicism aside and being willing to believe that we can aspire to be better. That's half the battle with the opera as much as in the matters of love it deals with. 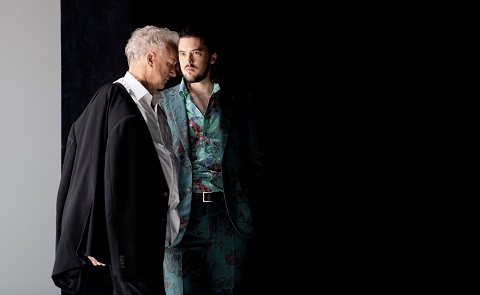 August 2020 may have meant a reduced opera programme for Salzburg, with only Elektra and Così fan tutte staged, but the choice of works and their presentation - both premiere performances broadcast live-streaming - showcase everything that is brilliant about opera, about why it is important and why we must find a way to keep it and other performing arts alive through the current crisis. There's a lot we can learn from the arts about dealing with the current times, a lot that Strauss, von Hofmannsthal, Mozart and Da Ponte have to show us. Elektra shows one response to the world, of individuals put through extreme and challenging experiences, mental illness, enforced separation, Così another very different but challenging experience. Both however show that we're only human and capable of making mistakes, but the consequences of not learning from them are too terrible to imagine.