Back in 2013, Krzysztof Warlikowski set the Munich production of Richard Strauss's Die Frau ohne Schatten in an asylum. That's not a particularly original way to deal with such a wonderfully colourful and rich fairy-tale, but it remained largely effective through the power of Strauss and Hofmannsthal's extraordinary vision, with its psychoanalytical undercurrents that Warlikowski was careful not to dilute with too many distractions or modernisms. If there's ever a Strauss opera that deserves to be set in a mental institution though it's Elektra, where the mental disintegration of its lead figure as scored by Strauss is even more extreme than that of the preceding Salome (also recently reworked by this director). Warlikowski doesn't explicitly set this 2020 Salzburg production of Elektra in an asylum, but for all the aberrant behaviour on display in the House of Atreus, it might as well be.

As is often the case it's difficult and usually not particularly instructive to deconstruct Warlikowski's intentions or examine too closely how they align with the themes of the work in question, particularly when he goes overboard in cinematic references such as in the recent production of The Tales of Hoffmann. Some of the director's familiar mannerisms are there in the Salzburg Elektra, but mainly evident only in the set design of his partner and regular collaborator Małgorzata Szczęśniak. They take full measure and width of the Felsenreitschule venue in Salzburg to create a huge (socially distanced) space for the work, much wider than the usual claustrophobic set usually reserved for this intense work. If there's a method to this, it can only be to rise to the scale of the orchestration itself, and in terms of that and Franz Welser-Möst's conducting of the Vienna Philharmonic, it certainly gives full expression to the opera's immense forces. 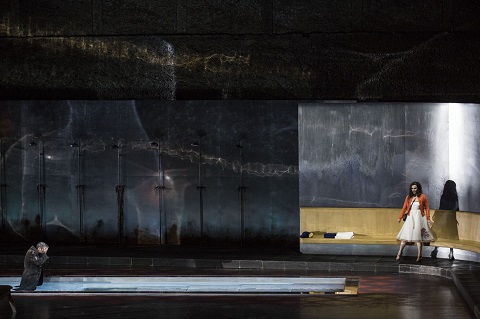 One side of the stage does indeed have the look of a rundown asylum, with a long narrow communal bath and row of showers with rust stained steel walls on Elektra's side of the House. The water from the shallow pool causes flickering reflections that highlight and suggest the constant uncontrolled agitation of Elekra's mind over the murder of her father Agamemnon and her desire for vengeance upon her mother Clytemnestra. The other side of the stage holds a glass panelled interior room of the palace where Clytemnestra and her maids are bathed in blood red lighting, Warlikowski using video cameras to project what goes on inside. In its totality the set effectively creates an environment that simultaneously reflects the internalised emotions barely controlled by external appearances.

Other than that Warlikowski sticks fairly closely to the ample expression that is already there in the music with few of the distractions or diversions that you usually find with this director. There is an autopsy, a few stray figures who wander dazed onto the stage, some dummies of children, but there are no dancer interludes and no short film introduction, although the scene is set with a recital of backgrounding text before the opera starts. With the spirit of Agamemnon made present, it's clear then that the director wants to bring motivation and characterisation to the fore and, aligned with the score, it's impossible not to feel Elektra's pain on a deep and visceral level which, without taking away from the quality of the poetry and the psychological depths explored, is surely where opera is most successful and notable. 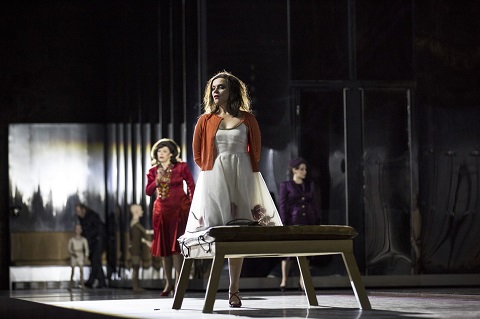 Crucially, you can't really achieve that level of dramatic intensity without an Elekra to match it and, well, there was little doubt that on her recent performances of growing power and intensity, Aušrinė Stundytė would be capable of measuring up to it. It's an outstanding performance, the Lithuanian soprano as ever almost completely immersed in character (to be completely immersed would surely be next to madness). But a damaged Elektra can't work in isolation. Warlikowski takes care not to present Clytemnestra as a domineering caricature and sung by Tanja Ariane Baumgartner, we see a more troubled and not unsympathetic figure who has been a victim of circumstances, but still very dangerous. Asmik Grigorian also permits you to have some sympathy for the usually wet Chrysothemis, the force of her delivery undoubtedly contributing to the success of that characterisation.

Make no mistake however, violence, madness and death are the inevitable outcome, deliriously unravelled in Strauss's extraordinary score and put into words in Hugo von Hofmannsthal's very distinctive and poetically rich spin on Sophocles' version of the Greek tragedy. For all the beauty of the language, it distills the essence of the drama down into the big questions and conflicts of life and death, hatred and love, family bonds and debts of honour, irreconcilable extremes that descend into madness and death. Kyzysztof Warlikowski effectively visualises that violent climax with large scale projections of splattered blood and masses of flies. Whether you follow it or just feel it, the Salzburg production as a whole certainly succeeds in doing justice to one of the greatest opera works of the 20th century, still capable of leaving you almost breathless and in shock.