When it comes to Handel, the Baroque music and formality of the libretti can often be a little bit dry, particularly his pastoral dramas and religious oratorios. There's nothing however that a good bit of direction can't fix, and even the love story of a shepherd and a nymph in Acis and Galatea can be enlivened and made relatable, as the Opera Theatre Company demonstrated in their setting of the story as a drunken fracas in an Irish pub. Directed by Martin Constantine, Buxton's production also updates Acis and Galatea, but finds another way to work with the old-fashioned sentiments expressed in the libretto, though not quite so consistently or successfully.

Rather than finding a way into the work to make it come alive, the 2021 Buxton International Festival production takes a distanced half-hearted academic approach to the work, the setting being a Human Sciences International Symposium in 1962 being held to explore the subject of love - worldly and otherworldly - as it is dealt with in Handel's Acis and Galatea. It's not a bad idea as such, introducing the key players and bringing a focus through slides and projections to the key words and sentiments to do with love that librettist John Gay repeats throughout the opera. Hence, joy, pleasure and happiness are highlighted but also wretchedness. 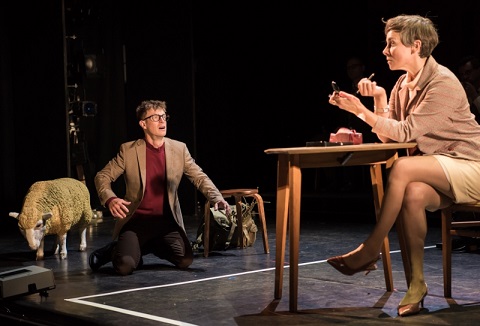 Each of the delegates present their papers on the subject, while a stage hand provides props to put these ideas into the context of the present day. It being 1962, it's the model idea of the happy couple in a domestic setting, an armchair and a table with a pet bird in a cage perhaps symbolic of their love. Slides show the traditional roles of the charming dutiful wife cooking for and looking after her husband after a hard day's work tending his sheep. And then Polyphemus comes along and in a jealous rage crushes their love (the bird) and eventually his rage becomes so great that he strikes down Acis.

This scenario on its own attempts to get across the diversity and extreme nature of emotions engendered by love but can appear rather broad and superficial. Handel's music certainly weaves an elegant and stately path through the trials and vicissitudes of love. It's beautiful, stately, a little old-fashioned and rather French tragédie-lyrique in the formality of its drama dealing with the conflict between mortals and otherworldly creatures and gods, of which Acis becomes one of their number in the tragic conclusion. Musically its a delight although a little pedestrian and unvarying in pace and dynamic, so it can do with a little more oopmh (technical term) from the direction. Unfortunately it doesn't quite get it here.

Not all the actions relate to a conference presentation, but it's not clear either whether fiction becomes blurred with fact over a love affair between colleagues or whether there's an academic disagreement. The actions unfortunately don't really relate to what is going on. One baffling scene has Acis trying on jackets from a rail and ending up putting them on one on top of the other in his upset state, before being calmed down by Damon. Some of the tragedy is inevitably diminished by Acis suffering little more than an admittedly vicious blow to the head by his academic/love rival, but sometimes bringing Handel down to earth isn't a bad thing.

And in a way, the conclusion succeeds in some respect at getting that across. Throwing off their stuffy formal suits, the academics at the conference step down from the platform to enjoying the pleasures that nature has to bring. The reveal of a field behind the curtain and projection screen in the hall is also a little strange, but the idea is at least buoyed along by the music and sentiments of Handel's beautiful score. And by the singing. The quality of the ensemble is as essential in Handel as the individual voices and they were superbly cast here and beautifully delivered. 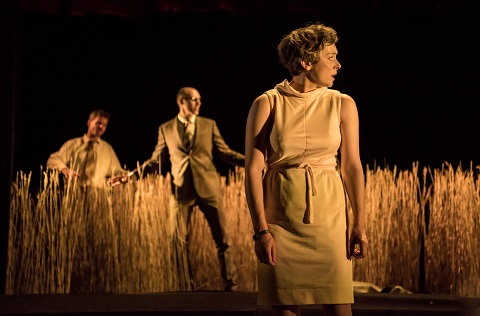 Anna Dennis was a sincere lyrical Galatea, Samuel Boden a fervent Acis, Edward Grint a suitably raging Polyphemus, Jorge Navarro Colorado combining the roles of Damon and Coridon with a lovely warm timbre, and David de Winter blending in beautifully as Chorus. The complementing of voices for the roles was lovely; Acis and Galatea genuinely sounded like a heavenly match together, contrasting with darkness of Polyphemus, the ensemble of five voices just gorgeous.

Christian Curnyn's direction of the Early Opera Company orchestra didn't always make the music sing, but if anything can make the sentiments of Handel and the potentially stuffy quality of the musical arrangements come alive in the absence of a suitable idea and setting it's the voices and by the conclusion, this Acis and Galatea was soaring. 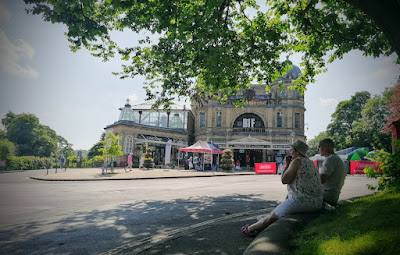 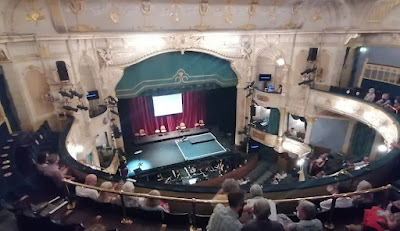