We have already seen how it is going to be necessary to adapt our lives post-Covid, if such a time is yet imaginable, and it looks like things might never be quite the same again. Opera however has always been adaptable and open to incorporating a variety of art forms, since music and theatre offer many means of expression, combining the abstract and the concrete. One opera that stands almost unique in its approach is Debussy's Pelléas et Mélisande, in the way that it sets drama to music, and not just any drama but a Symbolist drama by Maurice Maeterlinck. As such it offers many ways of interpretation of meaning and vision and you imagine that few works are as well suited to expressing social isolation and a sense of lockdown.

The Grand Théâtre de Genève have certainly put together an interesting and unconventional team for their social isolated lockdown version of the work and attempted to use it as a way of exploring another side of Debussy's enigmatic opera. The concept and performance artist Marina Abramović provides the concept for this production, and it's co-directed for the stage and choreographed with dance elements by Damien Jalet and Sidi Larbi Cherkaoui. With Jonathan Nott conducting the Suisse Romande orchestra in a spread-out fashion around him, you would expect the moody atmospherics to thrive in such an unconventional space, but somehow - too many cooks perhaps? - it doesn't quite live up to expectations. 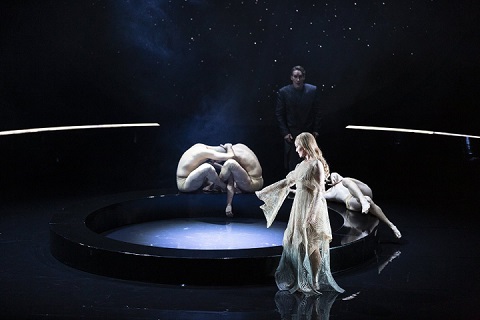 It at least approaches the idea of preserving the mystery and enigma of the opera rather than try to pin it down. I once observed in Robert Wilson's production of Pelléas et Mélisande at the Paris Opera that there was a kind of circularity to the work, Mélisande leaving one world and entering into another in much the same state of despair that she entered into it. Wilson's stylisations  - introducing social distancing on the opera stage long before it became necessary - had that haunted quality, of a never-ending story, of ghosts repeating and re-enacting a tragic tale for eternity. As an image of the abstract and enigmatic nature of Debussy's only opera, the circle is a symbol of infinity with no beginning and no end, works well, and it's used as such to similarly haunting effect in Marina Abramović's idea of expanding the work out into the infinite universe.

Space and circular imagery (planets, eyes) are evident throughout the Geneva production, and the circle can even be seen in the shape of the pool, one of infinite depths where Mélisande loses her ring (another circle). The circular image of the moon, reflected in the pool, also represents a cold enigma. In a Symbolist work like Maeterlinck's such ideas evidently work very well, particularly with the added mood that Debussy's music brings to this unique opera. Although it has a Gothic or Medieval character to it, the piece needs no concrete idea of time or place. It's as abstract and internalised a world as Tristan und Isolde, a work of forbidden love and obsession, something both works have in common if approached obviously in entirely different ways. 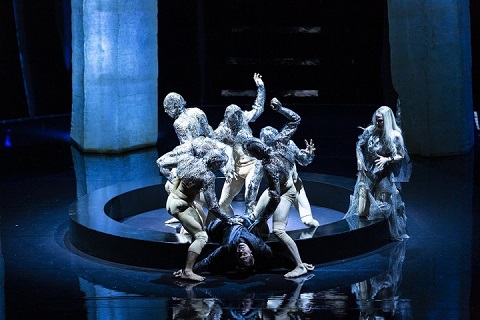 Approaching the work in an entirely different way is exactly what you expect from a production based on an idea by Abramović (who also recently devised an extraordinary new opera 7 Deaths of Maria Callas for the Bavarian State Opera last year), and choreographed by Jalet and Cherouaki. Rather than rely too much on the usual symbols or place too much emphasis on physical locations or internal dark places, Abramović visualises the work in a much more open environment, but one equally as isolating to the individual; in space. Obelisk monolithic crystals form rocks and grottoes as well as suggest a space ship, as the universe revolves and expands around Pelléas, Mélisande and Golaud. The director(s) also use the symbol of the eye to gaze on them from the emptiness of the infinite abyss of a black hole.

The dance moves are superbly choreographed and performed, the dancers moving fluidly around to 'enhance' the drama. Using some simple Improbable-style effects with reflective tape, they can become the tangled branches of the forest where Golaud is lost at the start, or weave Pelléas into the trap of Mélisande's hair. It sounds simple, but it's incredible how well this needs to be choreographed to be this effective. They can be purely abstract shapes and movement that tap into the undercurrents of the music and the nature of the characters, representing the oppressive qualities of Allemonde in wrestling semi-naked twisting bodies. Golaud's role in particular is magnified and multiplied with a team of dancers who forcefully surround and impress upon Mélisande. Sometimes however they can be a bit of a distraction and often feel unnecessary, intruding on the minimalist beauty of the piece, as well as making additional noise that isn't needed either. 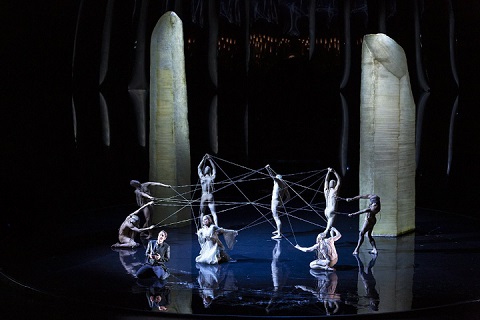 As gorgeous as the Geneva production is, it doesn't manage to penetrate or even bring anything new out of the opera's mysteries. Pelléas et Mélisande can be a cold and detached opera, but it can even thrive on that, and there are few who can do icy detached coolness as well as Robert Wilson. A little bit of humanness doesn't go amiss however and that's largely absent here. Jacques Imbrailo tries to bring some of that in as Pelléas, and it's hard to fault the performances of Mari Eriksmoen's Mélisande or Leigh Melrose's impressive Golaud, but despite everything none of them seem to make any real connection to the people, the place, the space or the music. I don't think it's the fact that the production had to be performed in an empty theatre or the arrangement of the orchestra spread are out into the parterre, but despite all the fine individual talents in place, there's a feeling that there is a connection missing to click it all into place.