With its blend of philosophy, religion, mythology, spirituality and humanism, Wagner's Parsifal can be a tough prospect to make sense of on a narrative level, particularly in translating that to a modern audience in recognisable human terms. Not that it needs a coherent narrative. Almost every production I've seen of this masterpiece has found original endless (and sometimes baffling) ways of presenting it, while at the same time everything that it is about is all there in the music. And when I say music, it's not just the notes on the page, the singing or even the interpretation of it but the space and time it occupies in performance. The viewer enters into communion with Parsifal in a way that does not happen quite the same way with any other opera.

High-flown words maybe, but there is truth in this. You could write volumes exploring the work, you could write books alone on productions like Herheim's Bayreuth Parsifal, and yet however the work is dressed up, whatever means are used to explore its themes, it rarely fails to make some kind of impact and it's often a profound one. At heart the theme and message of the work can be said to be relatively simple, but in its simplicity it touches on something vast, the essence of an important aspect of what it means to be human, perhaps the most important. Redemption through Compassion, the understanding of which will put us on the path to our soul's salvation. 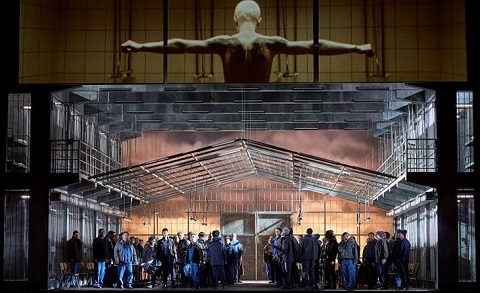 Even though there are clear religious and ceremonial overtones in the presentation of these themes in Parsifal's Easter Good Friday message, it certainly doesn't need to be seen through a Christian or religious perspective. Indeed such grave solemnity and reverence in a production can get in the way of letting the music express its deep human qualities. Not to make excuses for the sometimes unclear situations and direction in the current Vienna State Opera production by Kirill Serebrennikov, but even the idea of putting that into a coherent dramatic narrative is ridiculous. Anyone expecting or needing a "story" to get it across is missing the point. Richard Wagner utterly and completely puts it all into musical language, which is even more direct and yet complex in how it manages to achieve that with such incredible impact.

It's difficult to describe convincingly how the Vienna 2021 lockdown production manages to get that across - it would take a long time and a lot of pointless analysis - but it unquestionably does. Serebrennikov's setting certainly looks unlike anything else you might associate with Montsalvat. Here's it's a prison, looking more like Janáček's From The House of the Dead. Gurnemanz is the respected veteran lifer who takes young ones under his wing, shows them the ropes and even does tattoos for them. Unlike any other Gurnemanz, this one even collects packages of contraband drugs from bent wardens for them. He knows they need something else to get them through the misery of their situation, and tells them stories that give hope that some kind of redemption may be possible. Even those living in an eternal hell like the seriously ill Amfortas.

It seems unlikely that the new young man on the cell block is going to be any kind of saviour in this production. Young and foolish, he's forgotten his good upbringing and got into a lot of trouble. Not so innocent, in prison he has even killed a man, a "swan", an albino man with tattoo wings who tried to get close to him naked in the showers and paid the price. Someone however sees his potential; Kundry, a visitor who has been granted permission to photograph inside the prison, gathering images of raw masculinity for a fashion magazine, "Schloss". She however lives within a prison of her own and is seeking a way out, seeing something within this young man that might help her overcome her own demons if they don't swallow him up as well. 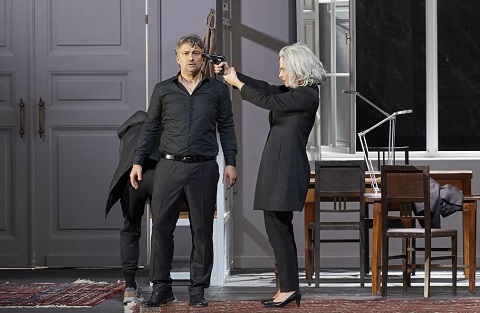 Aided by projections, the production plays the long first Act out as if it happens over a number of days, and that works well, in its own way bending time and space, encapsulating the inner world and dreams of the prisoners with the harsh reality of their confinement. The idea of being outside of time in any linear narrative is also put across in the use of flashback, Jonas Kaufmann the older wiser Parsifal looking back with regret on his past mistakes and innocence of his younger self, played by actor Nikolay Sidorenko. If you don't quite understand where it is going however that also turns out to be a good thing, as the whole opera is a process, you need to live through it and experience it in its totality to understand it in any kind of way.

Act II however proves to be pivotal here as it should be but far too often fails to adequately achieve. It opens up some of that in the unlikely setting of the offices of Schloss, a fashion magazine run by the tyrannical Klingsor. The Flowermaidens are fashion journalists, office staff and even cleaning staff, all lusting over the new cover model, which really is no less relatable than having mythical female ciphers float around him. What makes Act II striking is by bringing in what is only alluded to in the original and making it central to the purpose of the work, and that's Parsifal's mother Herzeleide.

Many productions have sought to extend the range of Parsifal far beyond the singing characters - Philipp Stölzl even recreating the crucifixion of Christ in a Deutsche Oper production - and with good reason, as much of what is learned as a process doesn't just extend over a lifetime, but over many lifetimes. The production here finds that the best way of expressing what sparks Parsifal's journey to self-realisation is the image that Kundry evokes of his mother. The director brings not just one but three Herzeleide's to the stage. Parsifal's first true feelings for another person are, appropriately and meaningfully, for his mother. Understanding what she has suffered for him only for him to go off the rails, is a profound revelation. Through this he suddenly realises what Amfortas has been going through, and sets out to find a way of bringing healing to his suffering.

And quite what role Kundry plays in this is also difficult to describe but it's vital, the Flowermaidens likewise presenting him with different aspects of what it means to be a woman, deepening his understanding of his own mother's situation. Somehow the director Serebrennikov - mainly though the medium of an astonishing performance from Elīna Garanča - manages to match up the sense of deep sorrow, regret and loss with a sultry undercurrent that runs through the music in this Act. Act II can often feel disjointed and unfathomable, but at its best it is enigmatic and the key to the work, and the new Vienna production makes the most of it, not least in Philippe Jordan's conducting, pacing and navigation of the dynamics of the score. 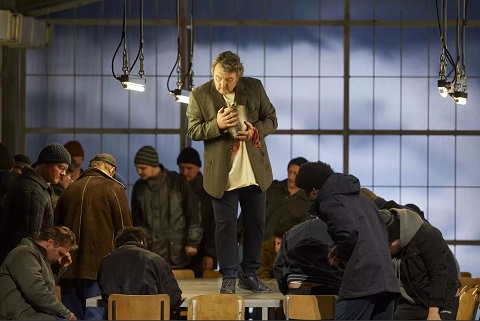 Trying to analyse and correlate the production with a predetermined idea of what Parsifal should be and even expecting it to deliver a coherent narrative is however besides the point. It's a metaphor, and it makes no more sense than expecting Wagner's mythology of the Knights of the Holy Grail, the suffering of Amfortas, the killing of a swan, the evil of Klingsor and the revelation in a kiss to make sense on any level of reality that is relatable to our lives. The best that a production can do is perhaps illuminate one aspect of the many themes and ideas expressed in the work and put it into terms that are recognisable to a modern audience. And if you can get across an important message - as this one does about imprisonment of the soul and finding a way to freedom - then it's more than enough. Anyone expecting to make narrative sense of the director's production however is only distracting themselves from the beauty of the sentiments expressed and the performances.

And what performances! It's not just a starry cast with a few experienced and distinguished Wagnerians in key roles, but there are some chances and risks taken in a few of the other casting choices that make it much more interesting and bring a little something extra to the production. Jonas Kaufmann sings the role of Parsifal well, if inevitably a little detached by being doubled with an actor. It's sung in the manner that you may be accustomed to, a manner not to everyone's taste, slightly over-pushed. He can do grave and anguished but personally I felt that he lacks sensitivity for Parsifal, and crucially lacks compassion for the role. Elsewhere however there is little to fault.

As we've come to expect from his other Wagner bass roles, Georg Zeppenfeld is just perfect. Hunding, Heinrich der Vogler and King Marke are one thing, but Gurnemanz is a much more extensive role on another level entirely. If the strain sometimes showed over the four hour running time, there was little evidence of it in his singing, which was faultless throughout, warm and compelling. As mentioned earlier, Elīna Garanča also takes her performance to another level. Kundry does present such opportunities for a singer, and even if this production didn't give her as much of a central role or room for interpretation, Garanča takes it to the level required in her singing and acting performance. I've never seen her sing a role so deeply. 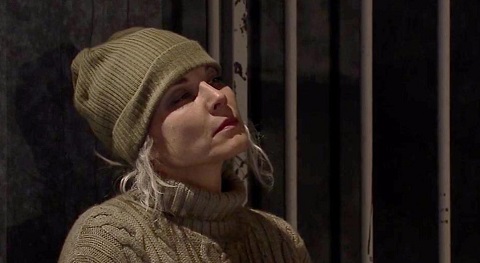 Defining Klingsor as a sleazy office manager abuser of his position and power is more relatable than viewing him simplistically as an evil sorcerer, and Wolfgang Koch is suitably sinister in a typically reliable performance. Ludovic Tézier is one of the world's finest Verdi baritones and that doesn't necessarily translate over to a traditional Amfortas role in Wagner, but it certainly makes for an interesting interpretation. He carries some of the mannerisms of Italian opera across, but nonetheless gives a lyrical, sincere and heartfelt performance here. Avoiding the cliches of the spear healing the wound, he nonetheless finds peace as Parsifal's healing message of love, forgiveness and compassion sees the swan reborn and mankind freed from the pain and prison of their everyday existence to possibility of a better world.