Aside from the difficulties of composing and staging an opera under current lockdown restrictions, another challenge that must face every new composer or artist is to create something new that stands up against the great artistic achievements of the past. Composing for a world premiere at the historic Cuvilliés-Theater in Munich, which opened in 1753 with Catone in Utica by Giovanni Battista Ferrandini and saw the premiere of Mozart's Idomeneo in 1781, you wonder whether Miroslav Srnka felt any additional pressure to live up to the greats. Despite the popular image of Mozart is of a composer who never suffered from self-doubt, I expect that even Mozart must have had the same insecurities following in the footsteps of the greats before him, so the pressures are probably the same as they ever were.

What Mozart would also have recognised however is that one of the real challenges for any artist creating something new is that there is a need to break from the past and create something meaningful and relevant that reflects and speaks the language of our own times. While other artforms and audiences may appear to be more amenable to change and progress and opera perhaps slower to accept modern ideas and technology, in truth opera is one of the most innovative of art forms, constantly evolving in how it incorporates disciplines and brings new advances in them together under one roof. At the very least - if maybe not much else - we can say that Mirsolaw Snrka's Singularly - A Space Opera for Young Voices - is not lacking ambition in that regard. 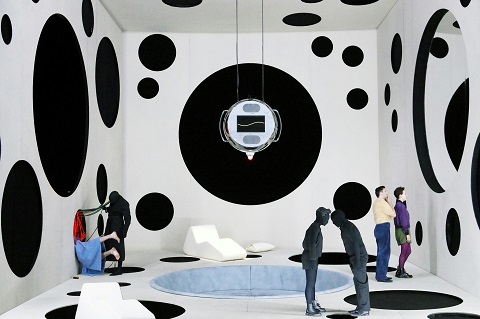 Whether the work has anything important to say, whether it makes any real advances in the world of music and opera, or even whether it is likely to be remembered and revived remains to be seen, but it doesn't seem that likely. It's perhaps mired too much in the contemporary language and technology of the day to be more than a curious remnant of a challenging period not just for opera composers, but for any artist. Essentially of course, as a science-fiction opera it's intention is to touch on more universal issues, and Tom Holloway's libretto does manage to relate to the dangers of alienation brought on by the growing human reliance on and relationship to technology.

Having acknowledged that it does tackle a relevant universal subject, it has to be said that Singularity doesn't really dig down too deep into that theme. The advances in technology and social media that allow everyone (including opera bloggers) to have a voice and be more likely to use it to criticise than praise is however perhaps one of the contemporary issues that Singularity takes in along the way. There is undoubtedly a fear that a reliance on technology, games and social media - particularly in a time of enforced social distancing - leads not just to a sense of dumbing down, but puts ever greater distance between us and our true empathic selves. It's not a massive concept and I'm sure there are more pressing issues to consider for the futures of the younger generation, but it's certainly something worth discussing.

The problem however with highlighting the idea of dumbing down technology being dangerous to our psychological and intellectual make-up is that the charge could also be leveled against the way that such work lays out that idea. We shouldn't confuse the medium with the message or necessarily see something that challenges the superficial appearing itself to be superficial, but it's by no means clear that Tom Holloway's libretto avoids that pitfall. It certainly doesn't help and it's not particularly clever that the opening lines of the opera strive to show their engagement with contemporary language and modern issues by reeling off a string of expletives. 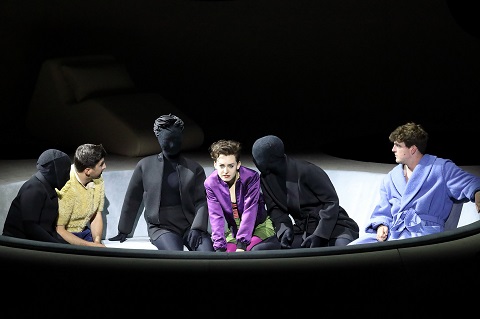 Rather, the language provides a ready-made criticism for the work, or at least for those less likely to look favourably on modern opera and contemporary music. "This is fucking shit, this sucks balls, [vomit green stuff]" - Singularity at least surely distinguishing itself by being the first opera with a libretto that employs emojis in the text - is the limited means of expression used by a young man so addicted to computer games that he is no longer able to appreciate the human attraction of his neglected girlfriend. He's not a particularly promising subject target for an opera to tackle, but it's undoubtedly a true reflection of where many young people are and it's something that could potentially have more serious consequences down the line.

And in a science-fiction work, the idea is really to explore where this is indeed likely to lead further down the line. For some reason, not entirely explained, the young man finds himself sucked down a vortex into a strange alien space environment that looks like the inside of a block of cheese, where he finds two other young people also with sociability problems. One of them is a young man who has never known the love of a woman who has a canary for a comfort zone, a substitute for a mummy who didn't love him. The other is a young woman who, I don't really know (or care to be honest), seems to also have issues of intimacy.

The three remain in this huis clos situation to work though their problems with the help of an out-of-date computer, Screeny. They are there for a long, long time, for upwards of 50 years - which seems to be about right as the amount of time it will take for this generation to be cured of the problems brought about by over-reliance on technology, and - to judge by the dialogue and inadequate attempts at communication that relies heavily on emojis - their inability to express their feelings, much less get in touch with them.

So it's not entirely irrelevant then, but whether you take to the opera's ideas and characters will depend on how well the creators put them across, and Singularity is not an easy opera to engage with. Certainly the libretto doesn't provide any real depth of insight or poetry, but that's inevitable when dealing with characters who talk in the common parlance of the day about losers getting triggered, getting cancelled and unfriended, people who find any sentence longer that 5 words a case of TL:DR, who litter their communication with smiley face, blowing a kiss and vomit green stuff emojis (all replicated in the subtitles). 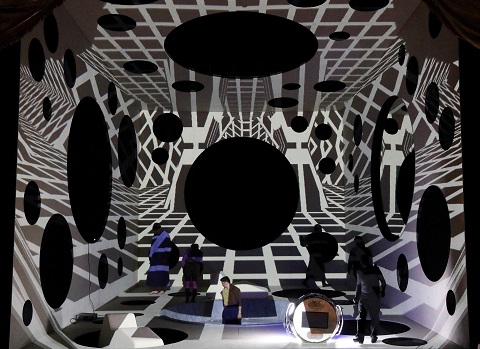 The libretto attempts to get around this to some extent by splitting each of the characters into two as Analogue and Digital selves, all of them singing roles. The digital self is hard to separate from the analogue person - since in this near future world, each person has implants to allow instant messaging (which some find convenient to turn off when they don't want to hear) - and they have almost equal roles in the opera. Although the digital selves are dressed like shadows, it's not always easy to know who is singing what and why, but it's a meaningful distinction and connection to make.

Raimund Bauer's set design for Nicolas Brieger's production is effective in its use of digital effects to achieve much in a relatively simple stage design. Kaleidoscopic projections present the room where most of the opera takes place as a futuristic science-fiction space world with holes of black matter. Whether it relates to any psychological state of the characters is anyone's guess, but it keeps the visual interest sustained at least. Engaging with the characters or caring about their predicament is much harder, and the libretto doesn't really find a way of making them sympathetic. Nor unfortunately does the singing which, despite the quality of the performers, is often required to be delivered in English as barked speech.

Specifically subtitled as a Space Opera for Young Voices, it is the voices that dominate over the musical content. Whether through intent or through necessity because of the Covid pandemic, this is a considerably reduced orchestration from Srnka's previous opera for Munich (South Pole, 2016) - from snow storm to snow flake - also written in collaboration with librettist Holloway. Klangforum Wien however are skilled practitioners of new music and unconventional instrumentation and under conductor Patrick Hahn they deliver the impact of the bursts of analogue and digital worlds in conflict, more in the realm of sound art than conventional music. Whether you judge Singularity to have succeeded in its modest ambitions, at the very least it doesn't fall into the trap of the well-meaning but patronising moralising and platitudes that can blight opera for young people. That's something, but I'm not sure the opera entirely avoids the pitfall of dealing with superficial characters or handle the contemporary issues of technology in our lives with any originality or insight.