One thing you could be sure of in an opera by Brian Irvine was that was never going to be anything conventional about it. I've seen the Belfast composer's work performed in a number of ways, in orchestral commissions for the BBC and Ulster Orchestra, in jazz improvisations with his own ensemble and his uncategorisable thrash classical improvisation work 13 Vices with Jennifer Walshe. A short opera piece that he did as part of a NI Opera Shorts commission in 2012 might have suggested the direction of his first full length opera, but the title Least Like the Other seems to apply to just as much to Brian Irvine as the subject of his new opera.

If however there is anyone in contemporary music that Irvine can be compared to, it's maybe Gerald Barry. There same sense of adventure, of a drama delivered at a furious pace, a determination not to accept limitations or conventions, but whereas Barry can appear frivolous - when in fact his operas are highly complex, considered and perfectly attuned to the content - there is at least no sense that there is any room for frivolity in this opera's subject of Rosemary Kennedy. Rosemary is one of the lesser known siblings in the Kennedy family, but there is a good reason for that, and it's the choice of subject that undoubtedly brings out a wide variety of music and theatrical techniques from a composer delving into the dark unknown. 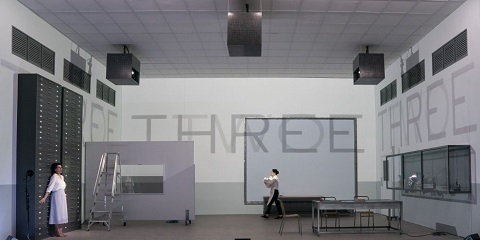 Perhaps the only way Least Like the Other: Searching for Rosemary Kennedy can be compared to classic opera is in the subject being that of a woman at odds with the world around her, at odds through no choice of her own with conventional social expectations in a largely - totally - patriarchal system. And, like the great Italian operas, the end is inevitably a tragic one. Born in 1918, Rosemary Kennedy, the third of the Kennedy siblings and sister of John F. Kennedy, could have been expected to have had a better start in life and more opportunities in the early to mid-twentieth century, but even aside from her being born with a disability, her path through life would still be curtailed and even destroyed by outside factors and social pressures.

Rosemary's troubles and certainly the most damaging factor on her life began at birth and even that can be attributed to the prevailing social and patriarchal order. The doctor was late to arrive at her birth, so her mother Rose was told to hold child in until he arrived otherwise he would not be paid for delivery. Due to a lack of oxygen in birth canal, Rosemary was born intellectually disabled. At the age of 23 she was subjected to a lobotomy, a new technique developed by neurologist Walter Freeman, as an attempted cure for her increasingly difficult behaviour. As a result she was left with capacity of a 2 year old, unable to walk or speak. She would spend the next 57 years of her life in a convent, removed from the Kennedy family.

As that also meant that she was removed from society, there is very little documentary record of Rosemary's life. Irvine's approach to this subject then is defined to some extent by the lack of source material, but it is certainly not limited by it. Working with theatre and opera director Netia Jones, the collaboration manages to bring the full horror of the story to life, as well as casting a critical eye on the kind of society that allows such things to take place. Least Like the Other turns out to be one of those works where music and theatre come together to create a narrative that goes beyond mere dramatic representation. 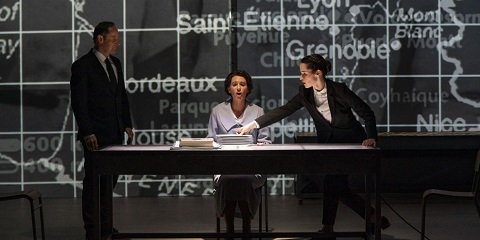 Essentially, it would be difficult in any case to have a glamorous soprano or mezzo-soprano represent Rosemary Kennedy. There is only one singing voice in the opera but the singer doesn't play Rosemary as much as provides a focal point for the pressures placed on her by the system, her family, religion, social expectations, and as a woman being generally submissive to the needs of men. She is almost a Not-Rosemary, the negation of the personality by those around her, by the social and family pressures around her, which are vividly played out in a number of scenes.

The opera might only have one singer, along with two actors and a voice-over narrator, but it also has music and theatre. The medical texts detailing lobotomy aims and procedures as a cure for the feeble minded and as a tool to control the criminality in the lower classes, the aggrandising speeches by Freeman and the autobiographical extracts from Rosemary's mother all convey the shock and horror for the primitive views on child rearing and treatment of mental illness, but Irvine's music and his writing for the voice - by turns insistent, elegiac and furious - allows you to feel it as it would be experienced by someone going through it; It's not the singer who is Rosemary Kennedy, it's the audience.

Although she lived a long life after the botched and crude surgery she was subjected to, it's at the point where Rosemary is completely deprived of having any control over her faculties or volition that Irvine and Jones close the story. Rummaging through the drawers of her life, everything is strewn across the stage as the music reaches a level of feverish activity, with strobe lighting, and the pre-recorded music by the INO orchestra spread across the theatre in 16-track surround. After that there we are left with an empty stage, with projections showing a body moving gently in a swimming pool to a slow piano accompaniment. Quiet, calm, empty, Rosemary - who loved to swim - is gone, at peace, a mind lost. 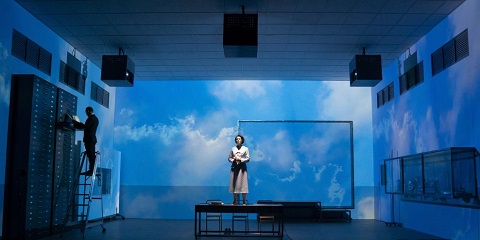 First presented at the Galway Festival in 2019 to great critical acclaim, further performances of Least Like the Other planned for 2020 were inevitably cancelled due to the pandemic and lockdown, so it was exciting to have the opportunity to see it in Dublin at the start of the new 2021/22 Irish National Opera season, even in the socially distanced seating of the O'Reilly Theatre. It didn't disappoint. The necessity of a pre-recorded score conducted by Fergus Sheil was used to the advantage of theatrical presentation, and was it played with such intensity, including improvising musicians, that it was virtually impossible to tell that it wasn't being played live.

Soprano Amy Ní Fhearraigh, singing on alternate nights to mezzo-soprano Naomi Louise O'Connell, was certainly singing live and had the technical and emotional range to take on the incredibly challenging role of not just Rosemary, but essentially singing the whole 75 minute opera. That's to take nothing away from the importance of the actors, the delivery of the texts and the whole theatrical presentation in a striking and impressive set design created by director Netia Jones. With Irvine's score, this was a completely immersive and almost gut-wrenching experience, music, singing and dramatic presentation locking together as it should in opera, but even more importantly here with no defined characters and no straightforward dramatic narrative to create a complete, thoughtful and moving operatic experience. 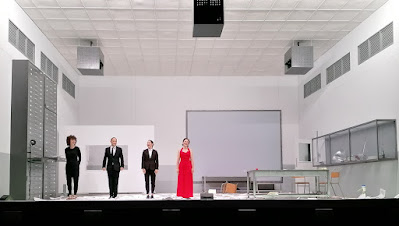