Buxton is known for reviving rare and little-known operas in their annual festival, but there is also always a tremendous variety to the musical offerings. This year was no exception. There was a rare Rossini, a new contemporary opera by Tom Coult, a Sondheim musical Gypsy, Jonathan Dove's Mansfield Park, a baroque opera in Johann Hasse's Antonio e Cleopatra and a comic opera by Donizetti that, for me at least, is known only by reputation. Another thing Buxton do well is farce, whether it's Mozart (La Finta Giardiniera) or Britten (Albert Herring), they recognise that humour is an essential part of opera, that there are times when it shouldn't be taken so seriously, but at the same time, comedy has a way of revealing truths that may be difficult to broach in any other way.

How else for example, can you look upon the complicated business writing an opera to satirise the process of putting on an opera? That's what Viva la Diva (alternatively known as Viva la Mamma, based on Donizetti's Le convenienze ed inconvenienze teatrali) is all about, and typically Buxton - recognising that they aren't exactly Glyndebourne, Salzburg or one of the very important opera festivals - do it very much their own inimitable and self-effacing way (while also making fun of Glyndebourne and Salzburg). The temptation of what you can do with an opera about the problems that can arise trying to put on an opera are too much to resist and the BIF go out of their way to make it feel 'at home', recognisable not just to the opera world trapped in its own little hermetic bubble, but as something that exists very much in the world of culture and arts funding, business dealing and political favours.

Not only does director Stephen Medcalf not resist but he takes it much further, and before we even get to the rehearsal room in Act I there are an extra highly entertaining 20 minutes of a prologue added to cover the auditions for a production of the opera seria Romolo ed Ersilia for the 2022 High Peak Opera Festival. Donizetti's original work, adapted from plays by Simeone Antonio Sografi on the theatrical world, are consequently greatly reworked in a new English version by Kit Hesketh-Harvey. This brings it right up to date and introduces several more levels of humour to the proceedings, where even the person doing the surtitles has a few observations of his own to impart about his role in the whole process of putting on an opera. It's a very clever idea that introduces the characters and warms the audience up for what will follow.

It's a wonderfully witty colloquial and contemporary translation/resetting/rewriting of the opera, right down to renaming the characters, including Vanamaka Zonnendanz as a Czech mezzo, a Mr B.S. Merchant as the director, Conn Chetham as the dodgy impresario, and Huw Watt as the conductor. The rehearsal room also has local resonances and references, there are a few in-jokes thrown in and extemporised for the current high temperatures (it was 37°C outside). It's a laugh a minute if you can keep up with the pace as the jokes are flying out. Donizetti's opera evidently provides the basis for this, providing an insight into the whole creative and performance process as well as the personalities involved, and the director Stephen Medcalf swears that nothing in the Buxton production is entirely made up, but has a basis in the reality that he has experienced in his career. 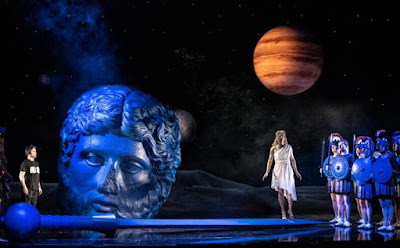 Viva la Diva may not be anything more than an amusing satire that pokes fun at the personalities involved and their mannerisms, but it's just as clever and layered as Ariadne auf Naxos - if clearly not as musically sophisticated as Richard Strauss - predating it by almost a century. If you are going to play a comedy like this as a farce, the success rests just as heavily on the performers being willing to put everything into it, and that was very much the case here. That goes right down to the conductor Iwan Davies taking part, demonstrating a comic temperamental impatience with his singers, and by extension this involvement undoubtedly fed into the bright, lovely music performance by the Northern Chamber Orchestra.

It would be indelicate to name any of the personalities being satirised - they were broad enough that everyone could make their own mind up about who the acting-up Prima Donna most resembles (and I'm sure insiders will know a few of their own), but Jenny Stafford was marvellous, darling. We got a spot on performance from Lithuanian bass baritone Raimundas Juzuitis as Haakan Czestikov. Although his exaggerated thick Russian accent dialogue wasn't always easy to make out, his threatening presence and singing were excellent. We didn't get enough of Joseph Doody as the temperamental Italian tenor or Lauren Young as the Czech mezzo, but both were excellent. Quentin Hayes as Ray, Olivia Carrell as Alexa and Richard Burkhard as the impresario also lived up to their roles very well, but evidently George Humphreys, done up like a pantomime dame as Agatha, la Mamma, dominated proceedings. As usual the singers and 'singers' here get all the credit, but you have to acknowledge the contributions by the chorus, actors and other creatives so important in a team effort like this, even though as usual they don't even get a name check in a review.

Having said that it would be remiss not to mention the superb set design by Yannis Thavoris which added another element of satire at extravagant Regietheater productions. I actually thought it was a very convincing and workable concept for 'Romolo ed Ersilia'. Maybe not so much the Schmirnoff rocket, but I could see this working for Bregenz. I can't imagine where they got the funding for such an extravagant set at a festival in a little spa town on the edge of the Peak District, or rather I have a better idea now of the kind of business arrangements and deals that are made to get a show like this on the road. I just hope the cast and musicians got paid for this one. 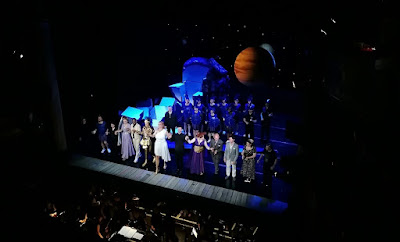