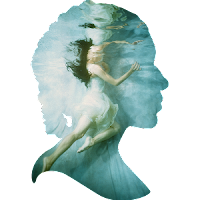 Like just about every other opera festival, Wexford Festival Opera didn't happen in the form of live performances last year but thankfully the attractive 2020 programme of rare Shakespeare related opera 'Shakespeare in the Heart' has been carried over to their 70th anniversary programme. The opening night opera Alfredo Catalani's Edmea only has a tenuous connection to Shakespeare - if any at all - with the notion that the original Dumas drama it is based on may have been inspired by Shakespeare. There's certainly an Ophelia quality to the lost drowned girl of Edmea, but it has more of A Midsummer Night's Dream quality in this production, even more so than Ambroise Thomas's opera of the name which was also included in the 2021 programme. At the very least Edmea suitably meets the festival's remit of unearthing deserving operatic gems that have been forgotten or never had the chance to reach a wider audience. Catalani's Edmea fit the opening night bill admirably.

Not that anyone would doubt the Wexford Festival Opera's choices - just because an opera is obscure and forgotten doesn't mean that it's not good (they've proven that point numerous times) - but there's not a lot of Alfredo Catalani heard nowadays to give even any real indication of the quality of his work. Like most Italian opera composers of the time, Catalani found himself overshadowed and somewhat neglected by his music publisher Ricordi putting much of their support to Puccini - whose success was of course richly merited- even though Catalani enjoyed the favour and support of Toscanini. His final and most successful opera, La Wally is pretty much all we have to go on, a work that certainly has its merits even if it is no longer fashionable and very rarely performed. 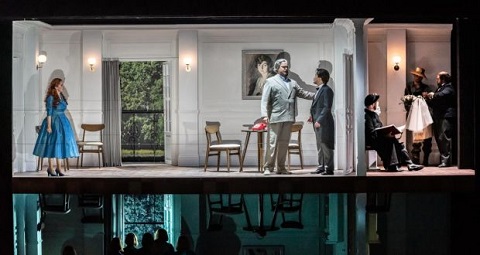 Fashions fade, as the saying goes, but style is eternal and Catalani was still in the process of developing his own style and voice when he died of tuberculosis at the age of 39. His work, like many of this time - it couldn't be ignored even if that reaction was negative - is influenced by Wagner, at least in terms of romanticism and the use of leitmotif, without sounding anything like Wagner. The question of whether Catalani might have presented an alternative to verismo, or whether he might still have been overshadowed by Puccini, whose progressive development was also tragically cut short, is one of those things that we will never know, but Italian opera never fully recovered from these losses or found new ground.

Edmea, first performed in 1886, marks the discovery of a popular direction for the composer that would culminate in La Wally in 1892, unquestionably the only work that Catalani is popularly known for in opera circles today. The story is adapted from the drama Les Danicheff by Alexandre Dumas fils, the author of La Dame aux Camélias which formed the basis for Verdi's La Traviata. It's a romantic drama that has something of the feel of a fairy tale, which  makes it sound frivolous, but fairy tales usually have dark origins and can point to deeper truths. You wouldn't think that you could say that about the melodramatic plot of Edmea, which is rather simplistic as a story, the kind of thing you would typically find in bel canto, but there is a slightly darker Verdi edge to the music and director Julia Burbach works to bring deeper qualities out of the work in the 2021 Wexford production.

The plot of Antonio Ghislalanzoni's libretto at least has some of the qualities of an early Verdi pot boiler. The orphan Edmea is in love with Oberto, the son of the family who raised her, but the Count of Leitmeritz is opposed to their union, seeing Edmea as more of a sister to Oberto. He arranges for Oberto to be sent away and for Edmea to be forced into a marriage with the house servant Ulmo. Ulmo is deeply conflicted by this turn of events, as he is madly in love with Edmea but knows that her heart lies with Oberto. Unable to tolerate the marriage she has been pushed into, Edmea throws herself into the river Elbe. 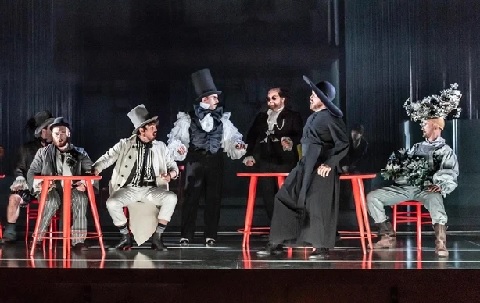 The romantic melodrama of Act I gives way to a more dreamlike fairytale quality in Act II, where we discover that Edmea has not drowned but has lost her mind. Ulmo has stood by her, pretending that he is her brother. The whole tone of the work has been transformed in the second Act - particularly in how it is presented in the Wexford production, opening with a tavern scene where court players and jesters surround them in boisterous but almost surreal scene with Edmea weaving in a daze around them. It has something of the feel of an extended mad scene; a mad scene one where we are all somewhat lost and caught up in Edmea's damaged mind.

That has already been hinted at in opening act as the line that this production is going to follow as a way of dealing with the operatic and theatrical mannerisms of the opera's drama. The stage in Act I shows Edmea's room split into two levels, the lower a dark inverse mirror the bright room above. Below, the female chorus in green dresses with red wigs act as the subconscious working of Edmea's mind, the young woman above wanting to enjoy life but knowing that trouble is brewing in her love for Oberto. In her madness Edmea transforms in Act II into the same red bobbed hair style of her subconscious, wearing a bright yellow dress, only returning to her familiar dress and room when matters are resolved (but still ambiguous) at the close of the opera.

The fantastical look and feel that Burbach strives for and achieves in Cécile Trémolières stunning set and costume designs works wonderfully to enhance the piece, with effective lighting probing further those dark corners of Edmea's mind. As ever with Wexford, if you are going to the trouble of unearthing a rare work, you want to do it justice and this is an ideal presentation of the work. It all works hand in hand with the music, the opera's ballet sequences - something characteristic of Catalani - similarly used to weave the spell. The reduced instrumentation on account of social distancing might also have helped prevent this slipping into whimsy, but it certainly didn't feel reduced. Francesco Cilluffo's vigorous conducting lent the work both the edge and romanticism it needed. 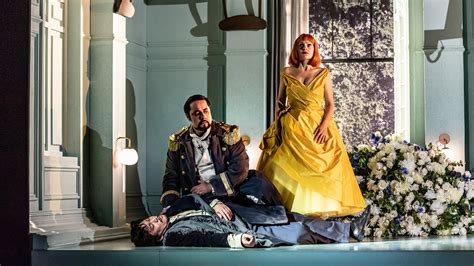 Act II brings a climactic resolution of its own as Edmea is reunited with Oberto and begins a path to regaining her mind, so you wonder where this is going to go in Act III. Then you remember that in the real world, Edmea is still married to Ulmo. The closing Act tidies that matter up in a dramatic but fairly conventional way with a tragic conclusion, one that at least is sympathetic not just to the heroine but also recognises that Ulmo isn't a villain. In some way he is the tragic pawn in this drama as much as Edmea. The music emphasises this, but it is also fairly conventional. Again the production design works to make this a little more interesting and follows through on the idea of exploring the mind of Edmea on two levels, with the sedate surface above and the emotional undercurrents beneath. It's not a wild idea but it does introduce an air of ambiguity about how much is real or the imagining of a young impressionable woman and it does prevent the opera slipping over into simply pure melodrama.

With Francesco Cilluffo conducting, there was never any chance of that. Again, not unlike how the festival's Artistic Director Rosetta Cucchi found a way to bring out the spiritual dimension of Alfano's Risurrezione in the revelatory 2017 Wexford Opera Festival production, the team here (again with Anne Sophie Duprels and Leon Kim) find a way to tap into the deeper nature of the subject that can be found in its music. Edmea too has all the vocal challenges of a typical Italian opera of this period, which means that it has conventional arias, love duets and a drinking scene in a tavern, but it also presents challenges for the emotional and vocal ranges. Anne Sophie Duprels was well cast to achieve that and bring something of the aforementioned human and spiritual character of Edmea. She was also impressive in her transformation to the dreamy Edmea of Act II who has lost her mind. Leon Kim was warmly received for a beautifully sung and sympathetic account of Ulmo. Luciano Ganci's warmly Italianate tenor worked well for Oberto and his Act II aria was one of the highlights of the evening.

The 22nd October performance of Catalani's Edmea will be streamed live from the Wexford Festival Opera on RTE and ARTE Concert. 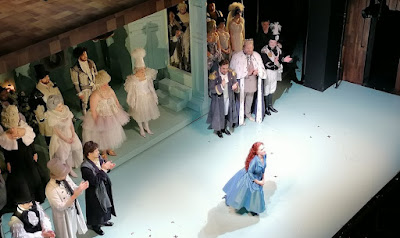