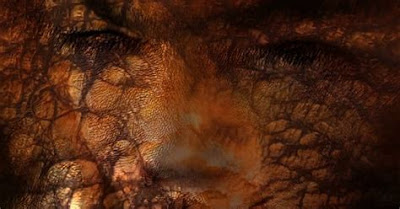 The subject of ecological disaster seems to be a common theme in many contemporary operas (and in contemporary writing), and it's not a surprise that this is might be one of the pressing issues at the moment for many people. If opera is to be meaningful and relevant it needs to tackle the issues of the day, and if it is to endure it has to be adaptable and universal. Sivan Eldar's Like Flesh makes a very successful attempt to work with ideas that have endured for a long time, drawing influence from Ovid's Metamorphoses, not to mention using a medium that has been around for centuries - opera of course - while at the same time finding a way through the music to remain modern in its expression of the drama.

As a way of approaching the subject in the form of a chamber opera, the librettist Cordelia Lynn comes up with a very concise and meaningful way of expressing the dilemma (much more successfully I feel than Tom Coult's recent Violet) though just three characters. Not a word is wasted as the three characters represent different sides of the equation. The man is a forester concerned with making the most of the catastrophe in a world that is beginning to feel the consequences of climate change, but his idea of making the most is to make money out of it. The woman, his wife, feels a closer bond with nature and sadness at the loss of the richness that was once there. There is also a student, a scientist, who is observing the changes, wanting to find a way if not to reverse the damage - it's too late for that - to at least minimise its impact. 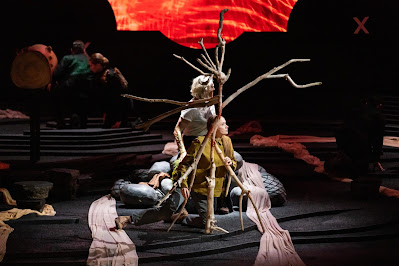 I say that there are three characters, but there is a fourth and that is the first voice we hear in the opera; the trees. The trees have been around a long time and have observed the changes that have occurred ever since man brought an axe into the forest for the first time (recognising the handle as "one of our own"). The voice of the forest is present throughout and in between the scenes, remembering "what the humans did next", but their voice is also seductive to the woman, who begins to show signs of not just becoming closer to nature, but being as one with nature in her transformation into a tree.

You could even say that there is a fifth character in the opera, but then you could say that the music is a distinct character in almost any opera. Here however, it does have a very important role and presence. Searching for a way of creating an approriate and effective sound world for the opera, seeing it as vitally important as a voice for Like Flesh, Sivar turned to the still important technicians of IRCAM for inspiration. The opera was developed using electronic sounds with the assistance of Augustin Muller, but the opera uses both acoustic and electronic playing, creating a voice that in a way represents the uneasy relationship between man and nature, although neither is solely associated solely with one type of sound.

In the hands of Le Balcon and the musical direction of Maxime Pascal, skilled practitioners of contemporary music with electronic effects who are notably also currently presenting a complete cycle of Stockhausen's epic Licht, the complexities and intricacies of Like Flesh are in safe hands. I daresay that the presentation is much more effective in a live environment, as speakers have been placed not just around the theatre in Lille, but also under the seats in order to place the audience entirely within the opera. Considering the intimate nature of the chamber operas arrangements and the sound effects, you can imagine that this would be hugely effective for this particular work in the theatre. For someone listening to a recording of the opera however, it does seem to rely too much on atmospheric drones and is not so musical. 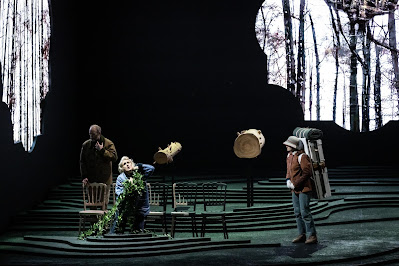 The presentation is just another element and it's the combination and successful deployment of all the other elements that mark this out as a success - the opera notably winning the 202I FEDORA Prize for Opera. Primarily, I however I feel that a large part of why it works so well is down to the strength of the libretto; in its symbolism, its poetry and the concision in how it gets across its ideas. I was particularly impressed as I wasn't keen on Cordelia Lynn's previous libretto for Katie Mitchell's feminist revisionist take on 'The Tempest' with Purcell music as Miranda. Sivan mentions in one of the interviews that the love triangle is not just a metaphor for the destruction of the environment, but the destruction of the environment is also a metaphor for relationships and perhaps even sexual identity. I think this really does come across and contribute to the very human element of the work, rather than it being a preachy environmental catastrophe warning.

The singing puts these ideas across beautifully and with deep feeling. It's a small cast of only three principals and a chorus, and there may be a lot of recitative-like spoken singing in English, but there are fine performances all round from Helena Rasker as the Woman, William Dazeley as her husband, the Forester and Juliette Allen as the Student. The chorus too as the forest, play a huge role, as they should in keeping with the theme of the work, with good solo singing and fine harmonies that indeed present an seductive impression of peace and harmony.

The stage production is another vital component in the overall quality and success of this staging of the opera. It is just beautiful, making stunning use of projections created by Francesco D’Abbraccio, but also effective in the simple transformation scenes and in the movements of the actors and chorus. It all comes together, working with the music and the performances to get across the intent of the opera's important ecological message in a tremendously effective way.