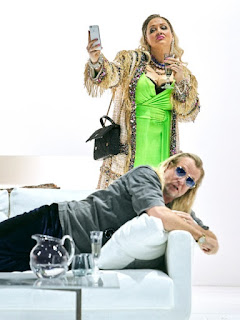 It's hard to judge a concept for an entire Ring cycle on one standalone part of the tetralogy, but particularly when you are presented - as those are who are unable to make/afford the journey to Bayreuth - with a streamed broadcast of Götterdämmerung alone. And yet, in some ways that makes it more interesting, forcing you to think about past productions of this opera and the Ring and consider where this one is coming from in relation to those, as well if course in relation to Wagner's intentions. There's also the fact that this production met with the usual ignorant boorish heckling from sections of the audience (why do they even go to Bayreuth?) unwilling to put their prejudices and old CD and vinyl recordings aside and see the work in a fresh new interpretation. That's what Bayreuth is about; sometimes it works and sometimes it doesn't but it's essential to keep revitalising and renewing the works of Richard Wagner.

Having said that - and with the caveat that I haven't seen the other three parts - Valentin Schwarz's concept for this production does seem like a bit of a mess that doesn't really hold together. As a basic premise to cover the entire cycle, the general idea here is to present Das Ring des Nibelungen as a Netflix serial, a saga of family ambition, conflict and dysfunction very much in the style of Succession. You can see why traditionalists would hate it. The prelude of Götterdämmerung reveals Brünnhilde and Siegfried in a spacious, modern if modestly furnished abode. In this production, they even have a child here who is assailed by nightmares of his/her unconventional upbringing and background. No doubt fuelled with such horrors in the past, figures of faceless Norns appear here as a nightmare with their threats of dire foreboding. Waking up, the child's parents launch right into their longstanding disputes and differences at the turn their relationship has taken. 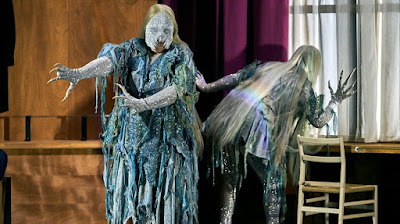 The Ring operas are very much about family and power struggles within it, as I'm sure this Bayreuth cycle emphasised this in earlier family disputes between Wotan and Fricke, between Wotan and Brünnhilde, between Sieglinde and Hunding (basically all of Die Walküre) but also between Siegfried and Mime. If the idea of money/gold/power hasn't already been established in Das Rheingold, it is the clear theme that runs through this production and leads to what we know will be a mighty fall of the great and not so good. What Schwarz also intends to introduce here as a further element to highlight the struggles for power is inheritance - one that has relevance through Wotan's line, Alberich's descendants and the Gibichung line. In this production the child is even used as a substitute for the ring, the 'ring' in a way being a cycle of inheritance and succession.

Or so it seems. The Ring operas however are wide and extensive enough to be able to support not just this, but many other matters that are still relevant and universal. Frank Castorf made much (some might say too much) of this in the last Bayreuth Ring cycle, and in Schwarz's production you can also see the impact this family has not just in destroying themselves, but destroying the world. There's a hint of this in the Norn's warning that we are probably too late to avert the damage that has been done to the ecosystem (world ash tree). And if Castorf's interpretation of the Ring emphasised the damage inflicted upon the world by capitalism, that also seems to be evident in the contrast between the home of Siegfried and Brünnhilde and the clean white luxury mansion being fussily arranged by Gutrune with maids aplenty and a servant with a magnum of champagne. 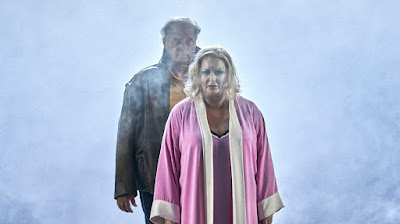 The hunting photo exhibited on the wall is a nice touch, showing a lightness of touch and humour, but also reflecting something important to the work. The heroism of Gunther is fake and their class bought, vulgar and ostentatious while Siegfried's has been earned through his own hard work. Siegfried is exploited and seduced by the attraction of wealth unaware of the value of his own labour, feeling unrewarded, undervalued, unrecognised. And unseen even. There is another figure in this production - not Wotan surely? Conscience maybe? - a silent figure protecting the child who likely features in other parts, again similar to other silent extra figures in Castorf's cycle. Siegfried is exploited by Gunther for how own prestige, and exploited himself by (putting aside any antisemitic suggestions) the string pulling behind the scenes of the Hagan, son of the Niebelungen.

So there are things that work well in this production, some that don't, others that are worth thinking over and not immediately dismissed by mindless booing of bores who want horned helmets and Wagner served up as nothing but ancient period costume mythology. Siegfried-disguised-as-Gunther's assault on Brünnhilde with a child in the house is every bit as horrific as any home invasion should be. That it's met at the end of Act I with loud boos trying to drown out the applause is a disgrace. Regardless of whether some elements of the stage design and direction might not be appealing, the artists and performers deserve to be listened to and treated with respect. Just don't applaud if you don't like it, or better still, just don't go and spoil it for others. Bayreuth want Wagner and Götterdämmerung remain relevant and are not be some dusty museum works of art, and such is the power of mythology and Wagner's unique insight, perspective and musical genius, that much of what it tells us relates constantly, continuously and ever-changing to meet the challenges we face in the present day. Too bad that some fail to or do not wish to find anything of worth in it.

The naysayers were silenced for a while at the end of Act II. There was nothing spectacular in the staging and showing Hagen meeting Alberich while hitting a punchbag isn't an impressive image, but the staging supported the singing and the singers took flight throughout the intense personal and family drama being enacted through Siegfried's deception of Brünnhilde with the Gibichung. The force of it on the others, combined with age old grievances and jealousies was put across terrifically. Again, not ideal in some places - if the fate of women in such family 'firms' is to be a feature of the production it needs stronger, clearer singing than Iréne Theorin can bring to the vital central role of Brünnhilde - but there is conviction there and a sense of this being a meaningful, painful situation that is going to lead to terrible consequences. The applause for the singers and hopefully for the orchestra under Cornelius Meister is well merited. 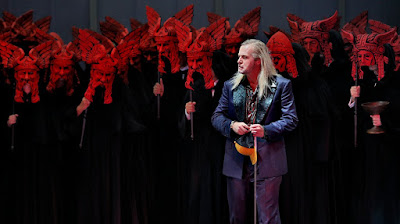 Act III was always going to be interesting to those of us who love the underrated Das Rheingold and haven't yet had an opportunity to see how the Rhine Daughters are depicted. Sadly, this element is a letdown, and so unfortunately is much of Act III as the concept, such as we can make of it, doesn't hold up to the conclusion required. The Rhinemaidens, apparently nannies to the child/ring, are in somewhat straitened circumstances here from the loss of the gold, residing in what looks like a sewer with drinks in their hands. It is brightened to reveal a deep drained swimming pool or water container. Either way it's not a terribly romantic image, and again it seems in part to draw on Frank Castorf's ideas and reimagining of the key work of a revolutionary socialist composer as an eternal class struggle and an attack on capitalism.

Unfortunately, Schwarz isn't quite as rigorous in detail as Castorf and Götterdämmerung limps towards an anti-climax. As I've said before, if there is one thing the end of the world and the fall of the Gods must NOT be, it's anticlimatic. Gunther's fate is unclear, he falls to the side while attempting to kidnap Siegfried's son, running away in terror at the approach of Brünnhilde, then climbs down into the 'pool' with a plastic bag that seems to contain the head of the invisible protector tortured in Act II (maybe Wotan indeed). The child drops dead as the Rhinemaidens leave stage. Brünnhilde turns into Salome embracing the head of Jokanaan (well, that's another dysfunctional family all right). Hagan mutters his final line and stumbles off. There is no great conflagration at the end (other than the outrage of inarticulate morons who couldn't wait to boo the production), but an image of twins in a womb. If Gunther's T-shirt is emblazoned with "Who the fuck is Grane?" that's the least of the questions left unanswered in this production. 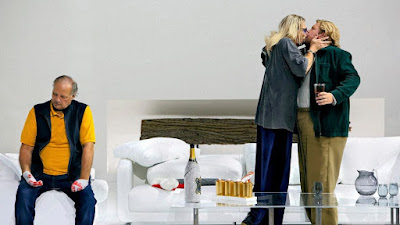 As ever at Bayreuth the performances are a mixed bag, but overall it delivered on the power and emotional content of the work, which is certainly in keeping with the family concept here. I think the only performance that comes over impressively without any reservations is Albert Dohmen's Hagen. He's the glue that holds this together, a mighty force here, although Cornelius Meister - brought on at short notice as a replacement - does well to keep the music charged on a tough gig. I was similarly impressed however with this production's Siegfried. Another late replacement for Stephen Gould, I have never come across Clay Hilley before, but he filled one of the most challenging roles in opera admirably. As previously noted, you needed a stronger Brünnhilde than Iréne Theorin for the purposes of this production, but I thought she gave a committed performance. Michael Kupfer-Radecky's Gunther was a little too aggressive and forced in his singing, but there is little else to fault there. Elisabeth Teige was excellent as Gutrune in eye-catching array of designer dresses. Christa Mayer's Waltraude in Act II is worthy of praise and an undoubted contributing factor to the success of that Act.

So while the musical and singing performances were engaging enough - and that's a challenge in its own right in this four-and-a-half hour log opera - ultimately Valentin Schwarz's Netflix epic is a bit of a letdown. At its conclusion anyway, but isn't that often the way with Netflix boxset series? I would rather however see someone try and apply new ideas and contemporary relevance to the Ring and partly fail, rather than see it treated 'respectfully' as a stale tribute to a dead albeit great (the greatest) opera composer. Long may Bayreuth keep that legacy alive, challenging and changing with the times, and hopefully the privileged minority Bayreuth audience who find their dull conservative attitudes challenged by creative artists will also change over time.