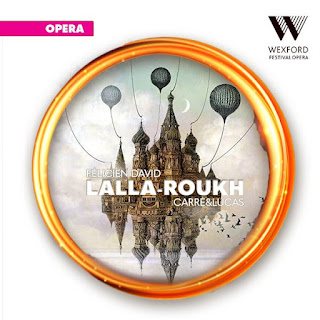 There was colour and variety in the various approaches that the different directors took to the very different kind of operas offered by Wexford Festival Opera on the mainstage this year, but Orpha Phelan's take on Félicien David's Lalla-Roukh was more colourful and more adventurous than all the others combined. Where it was perhaps more successful was in how the production rose to the meet challenges posed not just in making a rare and largely forgotten opera attractive to a modern audience, but in how it addressed the specific challenges of David's opera without apparently losing any of the essential character of the original.

On the one hand, it needed a more sensitive approach to cultural diversity in relation to the Middle East that were somewhat lacking in the rather literal approach taken to the production of Armida - in as far as you can take any opera involving magic and dragons literally. On the other hand, the plot of Lalla-Roukh itself, an opéra-comique with long passages of dialogue and exposition between songs, is not the most involved, with not too many twists and a 'surprise' conclusion that will surprise no-one. But it would be a shame all the same to go too far and lose the essential colour and character of the Arabian Nights-like tale. 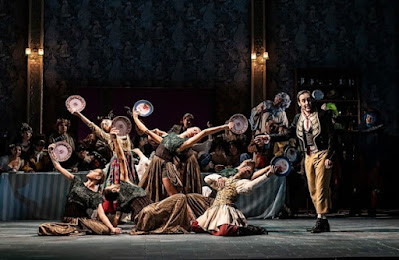 Director Orpha Phelan went for a local approach, a fantasy approach, a fairy tale approach, basically anything that would work, neglecting no opportunity to add amusing visual jokes and nice little details that might be easily overlooked. It's a risky approach as there is a danger of overloading a light opera entertainment with more that it can withstand, but with good musical direction, the usual high standard of singing and choral support, and Orpha Phelan's unerring sense of taste and balance, Félicien David's opera proved to be an absolute joy.

It was a little disconcerting though for a Middle Eastern fantasy to open in an old-fashioned Bewley's-style café called Leila O'Rourke's Tea Emporium. Outside a homeless person searches through the contents of a modern wheelie bin while inside the shop explodes with the entrance of colourful characters in fancy dress costumes where they appear to have grabbed anything to hand in a mix-and-match without worrying too much about the matching aspect. The homeless man, who finds a few leftovers from the bin, has also retrieved Thomas Moore's book from the dumper and proceeds to relate the story of Lalla Rookh, explaining the unusual nature of the colourful costumed characters as mythical creatures that accompany Lalla-Roukh on her journey to be married to the King. 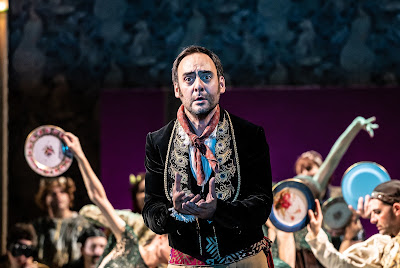 Although some of the large number of foreign visitors who regularly come to Wexford understandably struggled a little with the man's broad Irish accent loaded with a plenty of colloquialisms, it proved to be an excellent way of avoiding all the talking passages that risk disrupting the flow and character of the drama. It was also very witty, with knowing winks and - still very much in character - a little more direct in the insinuations and suggestions that would seem more obvious to a modern audience. There is even one scene where the illusion being spun breaks down, as the man confronts his own past while relating the story, the look in Lalla's eyes recalling a moment that perhaps sent him on his downward trajectory. It a lovely touch, suggesting that there is a human reality behind the magical fantasy, but there's just not quite enough there to totally carry this off.

That's because for all Phelan's dressing it up, the plot is quite simple. In Act 1, Lalla-Roukh, the daughter of the Moghul emperor Aurangzeb, has been promised in marriage to the King of Bukhara. It's Lord Baskir's job to get Lalla there intacta, which means keeping her away from the troublesome minstrel that has been following the entourage and beguiling the promised wife of the king. The Act is filled with entertaining songs, none of which are necessary to drive any drama forward. That would have been done in the dialogue/recitative in the original and is taken up by the homeless book-finder narrator here. 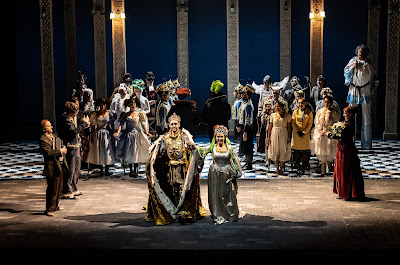 In Act 2 Phelan reduces the back-and-forth over Lalla's constant struggle with Baskir to get out of her obligation to marry the king, leaving more room for the music and some marvellously choreographed scenes to entertain in their own right, entertainment surely being the entire point of the opera. It slips neatly then to resolution when the king is revealed to be the singer, who followed the travelling retinue in disguise to be sure that Lalla loved him as a person. It might have been a surprise only to anyone who hadn't seen a similar ruse employed a few hours earlier in the same theatre in Alma Deutscher's Cinderella.

The star of the evening in what was definitely the star opera of the Festival, Gabrielle Philiponet sang the role of Lalla-Roukh wonderfully. Having a native French singer helped, but there is a particular kind of enunciation and expression required for this kind of opéra-comique and Philiponet was perfect for this, helping retain much of the original character of Félicien David's opera. The noted Irish actor Lorcan Cranitch also fulfilled the other essential element of the opera in his turn as the narrator in an excellent performance that helped establish a certain wistful storyteller tone on the work that made it feel like something important and meaningful, while preventing it from sounding like an old-fashioned period opera. It was a superb cast all round, Pablo Bemsch excellent as the singer (rather than old-fashioned 'minstrel') Nourreddin, Ben McAteer playing up the role of the hapless Baskir wonderfully, and Niamh O’Sullivan providing fine support as Lalla's lady-in-waiting, Mirza. 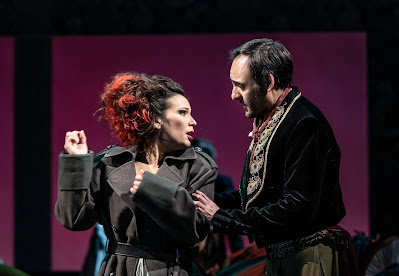 Conducted by Steven White, the orchestral performance in the pit was, as ever, a delight, the music filling the lovely acoustics of the O'Reilly Theatre. The chorus did Andrew Synott proud in the ensemble and supporting roles, as well as in performance for the director, who certainly didn't make it easy for them, finding something entertaining for them all to do throughout rather than just standing around. All this was vital to the whole tone of the work, keeping everything entertaining and engaging, never for a moment giving you pause other than to laugh out loud. For me, it was a perfect end to the festival, the kind of ending that will guarantee anticipation for three more fascinating and rarely performed works already announced for the 72nd Wexford Festival 'Women & War' programme. 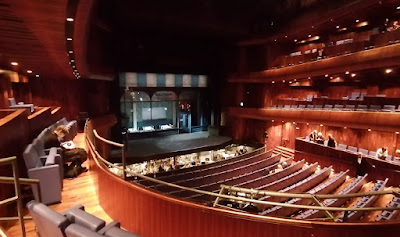 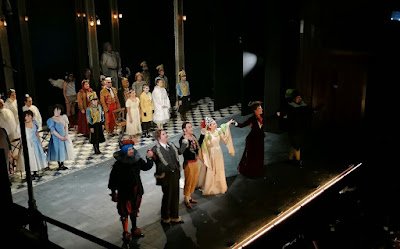