It wouldn't be like director Barrie Kosky to miss out on playing up any obvious sexual references, but he shows rather more subtlety than Richard Strauss during the opening exertions of Der Rosenkavalier in this production at the Bavarian State Opera. When it comes to highlighting the obvious however, he doesn't miss pointing out the thematic references to time by having Marschallin and Octavian carry on their business inside a spinning grandfather clock. In the unlikely event that you miss the implications, the boy servant Mohammed here is a Cupid as Old Father Time who sprinkles magic dust on their union, and the chiming of a clock is heard at the start of each of the three Acts.

But then it's not as if Strauss and Hofmannsthal were adverse to a bit of show-off cleverness either. Der Rosenkavalier one of opera's most extravagant works in terms of plotting, layering and referencing, delighting in combining farce with high art, comedy with contemplation. The opera captures the melancholy of being between one age and the next, the incompatibility of the old with the young, the old ways with the new ways, tradition with the modern age. There's a gradual acceptance of time and the pain it causes when the realisation hits of necessity to let go and let the world move on without you having as significant a role in it. 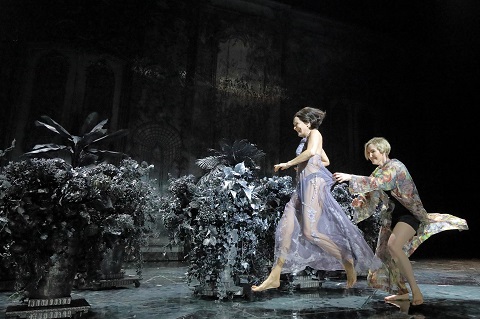 Wrapped up on a farce and aspiring to Mozart, Der Rosenkavalier doesn't miss the mark, even as far as realising that Mozart is of a past age and ideas need to be reconsidered for the modern era. It's a magnificent work, a work of true beauty and accomplishment, and there's a certain irony in the fact that we can look back at this end-of-an-era work with some regret that it belongs to a past age of opera that can never be recaptured, and undoubtedly there's some cleverness or self-awareness on the part of the creators themselves.

The sensible director then will avoid over-complicating the delicate equilibrium that the creators have established, and while few would normally apply that description to Barrie Kosky, he does indeed usually know when to intervene and when to step back in his role as Artistic Director at the Komische in Berlin. Aside from a little bit of highlighting here and there, he appears to slip into the background and let the glory of Der Rosenkavalier speak for itself, providing sumptuous but superficial surroundings and judging the mood perfectly throughout. Despite appearances, that does not come about by accident. 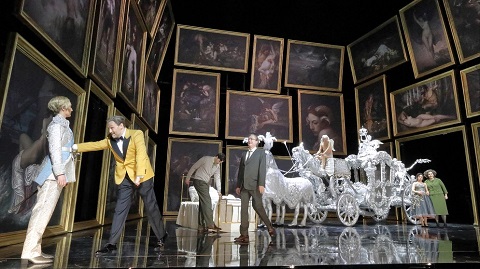 Kosky's touch of vulgarity for example is well-employed in the middle class aspirations of the Faninals, swept away with the notion of a forthcoming marriage into old money and nobility. Octavian as the Rosenkavalier obliges their notions coming not just with a silver rose, but replete with silver carriage and horses. It's unsurprising then that Sophie's head is turned with the romance of it all. It is a quite stunning coup de théâtre. Old age Cupid again sprinkles the magic dust of Strauss's beautiful music on Sophie and Octavian, while the Baron's satyrs chase the Faninal nymphs around the household. With classical paintings of similar scenes decorating the walls, and the old guard sprouting horns of their own, Kosky captures the essential mood and character of the scene perfectly, even with the classical allusions that Strauss and Hoffmansthal reference.

The singing and musical performances are also just about perfect: not just in interpretation of the score, but with performances that enhance the varied tones and intent of the opera. Marlis Petersen is an ideal Marschallin, with the necessary ability and experience (having once also been a Sophie in her time, the work again showing its relevance, meaning and cleverness), and she truly does the role justice. I haven't come across Samantha Hankey before but the US mezzo-soprano only appears to have been on the scene since 2017 and she makes a tremendous impression here as Octavian; nimble and playful also in the dual role as Mariandl. Christof Fischesser is excellent as the boorish Ochs Von Lerchenau, Johannes Martin Kränzle is luxury casting as Faninal and Katharina Konradi is a fine Sophie. With Vladimir Jurowski conducting the glorious sweep of it all, there's no danger of Act II or the concluding Act III failing to hit its targets and it doesn't need any heavy-handed signposting either, or at least no more than the spirit of Strauss and Hofmannsthal dictates. 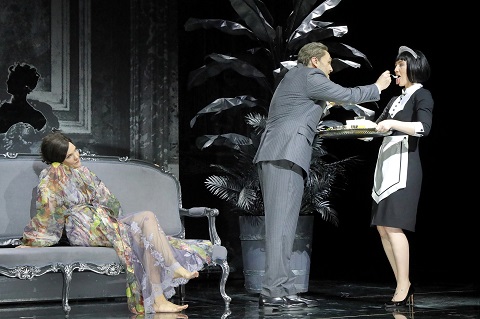 So when Petersen's Marschallin utters the words "Don't you realise it's all over?", it really hits home. Privilege, class, a whole era is gone or has turned - in the eyes of the young and the modern - into nothing more than a farce. As such Kosky can be forgiven for falling back on the old theatrical trick of turning the audience around and onto the stage, all the more so since there isn't an actual audience present in Munich during the Covid lockdown. Essentially it's what Strauss and Hofmannsthal do, opening up the theatricality of opera and drama as a device, as a trick, as a way of showing the truth. The Viennese farce can reveal something real truths and Der Rosenkavalier cuts to the quick when the Marschallin takes to the stage in Act III. The concluding scenes of this opera are devastating, tying everything up, bringing her curtain down on the old, opening up the way for the new.

There's no better recommendation that you can give for a production than that it brings out everything that is wonderful about an opera, and in Der Rosenkavalier it's even more important to get the tone and the singing right. The Bayerische Staatsoper, Kosky, Jurowski and Petersen at the head of a strong cast do that superbly. The humour feels weighted and balanced with the seriousness, the originality of the composition is perfectly set alongside the references to older works. It's brought out to perfection and to devastating impact here in a wonderfully played performance and deeply felt production that brought a little tear to the eye and a 'Bravo!' from this viewer.