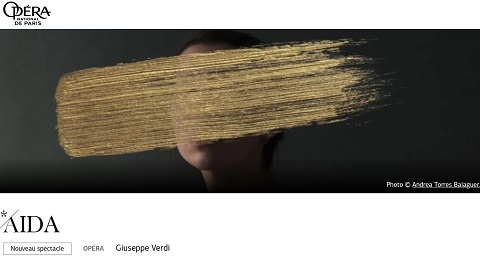 It would be a shame to ever get tired of Aida, as it is undoubtedly a supreme work of opera from a great composer reaching the pinnacle of his craft, but I could do without ever seeing another idealised ancient Egyptian setting and ceremonial procession. There's nothing inherently wrong with that it's just I like to see something that makes you think a little deeper about what the opera is about. And from the last few productions I've seen, the opera is surprisingly adaptable to draw out the work's themes, which are far as Verdi is concerned, is a large scale attack on war and religion and the impact of them on individual human lives.

There's a hint in the period and the museum setting of this Paris production that the director Lotte de Beer wants to draw out the issue of colonialism. The opera is updated here - thank goodness - to the Italian Risorgimento, a more meaningful period at least as far as Verdi was concerned. And there's no question that the underlying force of the work lies in such a context. Much as La Traviata gains its true strength from the sense of burning injustice towards women in society, Aida shows that there's a human reality and cost to war. It diminishes the power of the work if it is merely presented as a glamorous grand opera spectacle. 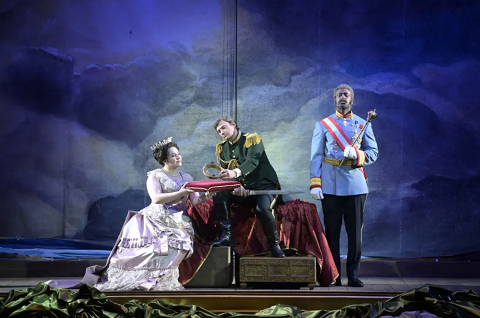 The Paris production opens with Radamès looking at a mummy-like Aida in a display case at a museum as he reflects on conflicted feelings of love for country and fighting for it in a war. The mummy Aida comes to life then as a guiding spirit - or something like that - in his life. Amneris then acts as the other side of this, his conflicted feelings of betrayal of his obligations to his own country. The other underlying themes and sentiments relating to war, religion and colonialism are similarly brought out in other exhibits from other cultures in glass cases. One of the cases contains a skull, the connotations of which are fairly obvious, even as Radamès as newly elected commander in arms anoints it with blood.

Whether you buy into this idea or not, the change of perspective - to say nothing of the beautiful set and costume design - at least serves to make this an attractive and fresh take on an opera whose themes are too often buried in convention and played purely for grand opera spectacle. The centrepiece victory march - often the most problematic for any director wishing to undercut the triumphalism of war - is presented not without some irony as a series of exhibition tableaux of classic paintings put on at the "museum". It references and recreates scenes of Napoleon, the raising of the flag on Iwo Jima, Delacroix's Liberty and other triumphal poses through the ages that could be said to glorify or idealise war.

It's a mark of how good the production is that it hits home effectively not just in the traditional big numbers and famous arias, but in the more human moments that are just as crucial such as the plight of the Ethiopian prisoners and Aida's recognition of her father. What also becomes evident - and Ksenia Dudnikova has much to contribute to this - is the other triumphant victory of Amneris over Aida in gaining the promise of marriage to Radamès. Verdi's ensemble writing for this is astonishing, gathering up all the conflicting desires and combining them with the inhuman treatment of prisoners of war to make this scene as forceful as any other in this work, the work of a complete master. 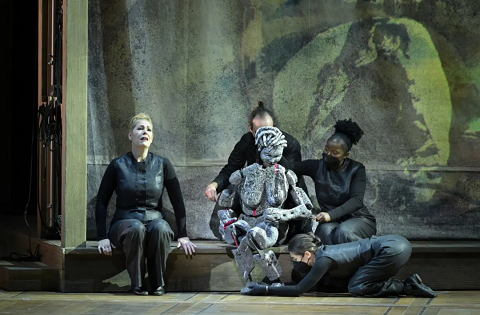 But why the puppets? This would have been a great production but for the dumb choice of using puppets for Aida and Amonasro. Life size puppets are not uncommon in opera productions, but they are rarely put to any meaningful use. In a Madama Butterfly, you could see some sense of purpose in Cio-Cio San being manipulated and treated like a doll, a plaything. Puppets have been used in Weber's Oberon as an impressive spectacle for a fairy-tale opera, but they can be superfluous to The Magic Flute. Other than to prevent singers 'blacking up' I can't for the life of me understand why Lotte de Beer went with the crude fossilised puppets for Aida. With three operators and Sandra Radvanovsky all on the stage for Aida, it's a terrible distraction. Add another two for Amomasro's half puppet and it over-complicates important direct scenes. Radvanovsky and Tézier don't seem to know whether they should be singing to each other or the puppets, and the camera isn't quite sure who to follow either. Perhaps worse, Jonas Kaufmann even has to endure the embarrassing situation of getting intimate with a puppet, and looks like he is being attacked by a gang.

As a human Aida, Sandra Radvanovsky is good. The high register occasionally pushes her out of comfort zone, thinning out to near inaudibility in some passages, but she brings character and depth of feeling to the work. It's a shame that she has to compete with a puppet and puppet handlers. The Uzbekistan mezzo-soprano Ksenia Dudnikova is just superb as Amneris. She handles the singing requirements more than capably, but just as importantly she captures the weak human side of Amneris as well as her regal imperiousness. Aida is an opera that is there for the taking by an Amneris of sufficient quality - her emotional and musical journey is a fascinating one - and I read somewhere that Verdi even considered calling the opera Amneris at one point. She may not yet be the ideal Amneris but Dudnikova makes her character human and as far as I'm concerned steals the show. 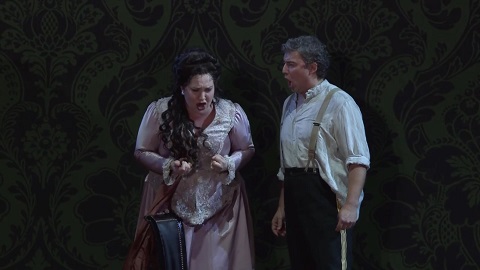 In another time that might have been the case for Jonas Kaufmann, but I have to say he is making less of an impression now with each new performance. Where once he was commanding, he now feels disengaged from the character and looks like he is going through the motions. The voice isn't quite as controlled and stable as it once was either, his diction lacks clarity and despite the loud delivery there's no real strength or volume there. I may be nit-picking and expecting too much because in the moments when he needs to be convincing, he is still very good. Amanasro is not a major role in this opera, but it counts and it's always a joy to hear a great Verdi baritone like Ludovic Tézier, who carries on regardless of the puppet distraction.

Some operas work better with the lack of an audience than others, but it may be something we have to get used to for a while yet. Broadcast live streaming from Paris, conducted by Michele Mariotti, this was as good a performance of Aida as any I've heard. The Paris Opera orchestra sound superb here, and despite the puppets and some weaknesses in the singing - the whole thing is redeemed to a large extent by the musical performance and Ksenia Dudnikova's Amneris - Lotte de Beer's production does succeed in allowing the quality of the opera and the purpose behind it to be brought out, allowing Aida to impress on it's own musical terms rather than as a mere spectacle.