It doesn't surprise me that some opera lovers would not be too fond of the directorial style of Frank Castorf. He certainly has his own unique approach to opera that is not to everyone's taste. Even if you are open to new ways of presenting opera, there's an awful lot thrown into a Castorf production; some of it obviously related to the work, other elements rather less so. It can be hard work and while you might want to put the effort in for something like Der Ring des Nibelungen, From The House of the Dead or Die Vögel, you might be less inclined to see all the Castorf tricks employed on something as popular as Gounod's Faust.

Opera however is a multi-faceted artform and the best works prove to be adaptable to renovation and reconsideration. Through its very nature Faust should provide not only plenty of entertaining songs, beautiful arias and dramatic situations for singing and dancing, but it should also be able to address other deeper elements in Dr Faustus's search for love, youth and the meaning of life. Entering into a pact with Satan in exchange for such knowledge inevitably brings up questions of morality, religion and war, which means there is plenty for a director like Frank Castorf to get his teeth into. 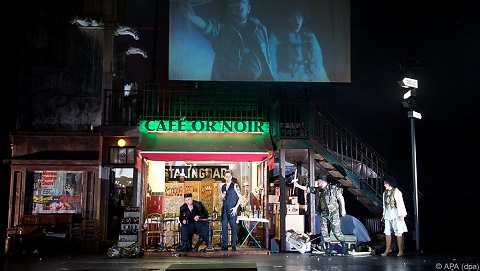 Castorf's approach is seemingly haphazard and random, a bit of a mess frankly on first viewing, particularly if you are looking for all the familiar situations and signposts. I mean, there are signposts up there pointing to Paris locations, but not the kind that help you find a direction through the drama. Rather than view the opera as a continuous narrative or, in the case of Gounod's opera, a series of separate scenes that build up into an overall work, Castorf goes for the holistic approach and puts everything on the stage all at once. And it's not just the sets all on a revolving platform and even piled on top of one another, but characters and separate incidents, unrelated to the main scene, are all shown simultaneously backstage, projected in live camera shots on screens. It's an awful lot to take in all at once.

So there on Aleksandar Denić's revolving set, you can see a condensed Paris, past and future all piled on top of one another, front and behind, interiors opening onto exteriors, with a cafe, a church, a butcher shop, the Folies Bergère, and residential apartments. It's dressed in typical Castorf fashion, with obscure movie posters, a telephone booth, a Coke machine. There's even a metro station recreated, the Stalingrad station, where Kate Lindsey's Siébel comes out wearing a desert combat military uniform, his feet bloodied. 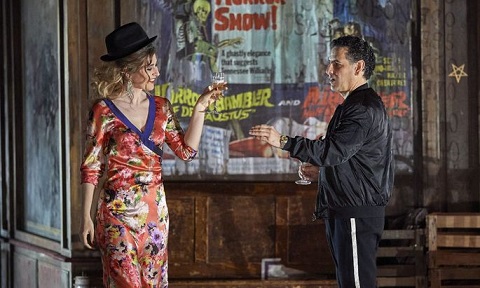 With police and foreign legion soldiers in kepis, one of Castorf's targets here is at least clear enough. Valentin emerges out of the metro and paints the words "Algeria is French" on the wall, while additional texts and commentary point to a less idealistic view of Valentin's military exploits, De Gaulle and France's colonialist history and atrocities. The devil is indeed in the detail and there's no doubting the nature of Mephistopheles here. He's not some smooth businessman or smart-dressed nobleman. He comes complete with demonic accoutrements; hairy goat legs, horse tail and hooves. He's a voodoo practitioner, using live snakes, he's menacing and seductive.

Having thrown all that onto the stage with not a great deal of rationale provided, there's little evidence either of much character development or direction of the singers. Juan Diego Flórez is allowed to stand and sing arias out directly to the audience in an arm waving concert performance delivery. Nicole Car likewise delivers arias outward, but makes up for this by appearing to be much more emotionally attuned to Marguerite and her sad fate. Here Marguerite is not the naive waif we are accustomed to, but since this is the 21st century (or 20th maybe) she is more worldly wise. She puffs on opium and has a good time, but is not fool enough to trust Faust and takes responsibility for her own mistakes.

Frank Castorf appears to be more in his element when he can abandon the limitations of the libretto and "surreptitiously" film Faust and Marguerite behind the scenes with handheld cameras in manufactured situations. This can be a little bit 'random' particularly when filming and developing the other characters Marthe and Siébel. If there is anything that helps guide you through Castorf's production, something compelling that holds like an anchoring point in all the madness, it's Nicole Car's performance that places Marguerite at the heart of Gounod's opera. It's an outstanding performance which could prove to be her defining role. 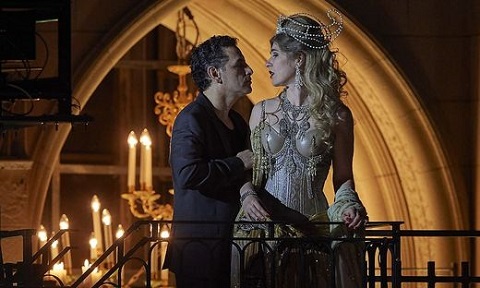 Juan Diego Flórez can hit the notes all right but his voice is a little too lightweight for Faust, when it needs more of an Alagna or Kaufmann. He doesn't make the same kind of impression that Car does, but aside from the operatic gesturing to the non-existent audience (the production here filmed during lockdown in an empty theatre), it's not a bad performance. Adam Palka is an excellent Mephistopheles, fully entering into the demonic nature of this version of the character and proving to be menacing in tone and performance. Bertrand de Billy conducted the work with a fullness of melody and drama.

I'm not so sure that Castorf really connects with Gounod's Faust or has anything insightful to say about it, but he certainly gives you plenty of opportunity to reconsider the work and see it in a new light. You can question the validity of that approach since for the most part that has less to do with the actual work than the peripheral action, in the additional behind the scenes projections and twists of characterisation. Whether it works or not, whether it's convincing or not isn't the point. You don't have to agree with his choices, but even that allows you to firm up your own convictions about the work. That, as far as I'm concerned, is certainly better than having nothing to contribute.