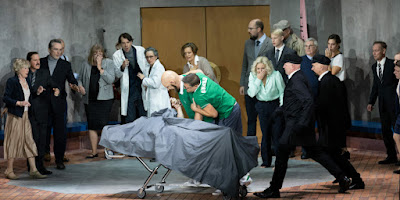 To save you time - and not everyone has the endurance to last through the fourth segment of a Ring cycle - what goes for Siegfried also holds true for Götterdämmerung. There are no sudden revelations in the last part that build on what little we have been able to make of what came before in Dmitri Tcherniakov's 2022 Ring cycle for the Berlin Staatsoper. There is little that is different in style, theme, singing and musical performances. You could say that Tcherniakov has run out of ideas, but some would dispute (and it would be hard to disagree with) that he didn't really have any new ideas in the first place. The bringing down to earth of high-flown spiritual, philosophical and mythological elements in Wagner's music dramas through psychological exploration has been a feature of his Wagner productions, and indeed many of his other recent opera productions.

Götterdämmerung's opening showing a happy home and everyday domesticity before the rot sets in, has been done numerous times, not least in the just passed 2022 Bayreuth Götterdämmerung. The three Norns are wobbly bent-over old ladies, previously seen as being present in the background in the rotating passing between rooms. Perhaps the point is that they are ancient and wise, or perhaps not so wise as they can't prevent what has happened and the course that future events will take. All in all though it's a very dull prologue, lacking on any kind of drive, purpose or meaning in the context of this production, but at least consistent within it. 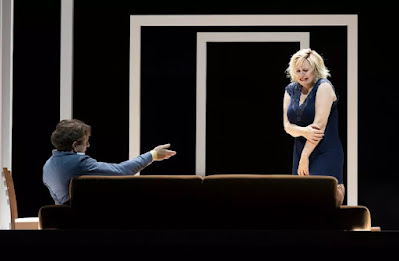 Also not unlike the recent Bayreuth production, Gunther (Lauri Vasar) and Gutrune (Mandy Fredrich) in Act I are styishly dressed and think themselves sophisticated, giggling and making fun of the rather square Siegfried when he turns up in his yellow pullover with elbow patches and grey blue slacks and jacket. He presents a suitably naive figure it must be said, Tcherniakov making sure you don't mistake him for anything heroic. And let's not forget that this is supposed to be taking place within a virtual reality experiment of some kind, isn't it? Is everyone else but Siegfried in on the scheme? It would appear so, Gunther playing along with the idea that this fool's cuddly toy is his horse Grane to see where the experiment will end up. Although his delusions could be dangerous. Just look at what happened to Alberich in Das Rheingold! (Johannes Martin Kränzle's shambling semi-naked figure in the prelude to Act II reminds us of that).

There is little to enliven the scene between Brünnhilde and Waltraute (long time since I've seen Violeta Urmana), who wanders into their home in a blue trenchcoat. As with Siegfried, there is a lot of pacing up and down, but Kampe and Urmana at least get across the import of Waltraute's impassioned warning to her sister about the fate of Valhalla (are we talking about the E.S.C.H.E institute?) should she fail to renounce the ring. Christian Thielemann's equally impassioned musical direction certainly helps get this across; the swirling fire leitmotif at the end of the scene heralding the arrival and menace of Siegfried and Gunther's deceit is powerfully employed. Andreas Schager is suitably threatening also in his thuggish assault as Gunther on Brünnhilde, still Siegfried in appearance, which perhaps adds to the menace. 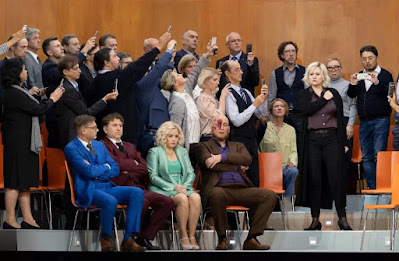 As elsewhere, not just in the previous scenes but throughout the whole Tchernaikov version of Das Ring des Nibelungen, the subsequent prelude to Act II between Hagen and Alberich is a mixed affair. The director fails to find any interesting way to stage the dramatic scenes of confrontation in any interesting way, or indeed connect it in any meaningful way to his testing centre experiment idea, but the performances of Mika Kares and Johannes Martin Kränzle nonetheless set up very well what is at stake and the tragedy that is to ensue in the subsequent scenes.

That at least is fully realised - or at least goes someway to redeeming Tcherniakov's staging elsewhere and deliver on Götterdämmerung as an effective conclusion - in the remaining scenes in this production. Avoiding making any real connection to the stress laboratory experiments - which let's face it, have contributed very little so far - the drama of Brünnhilde revealing Siegfried's betrayal carry the full weight of Wagner's intent. Anja Kampe is excellent here, as is Kares's Hagen and Lauri Vasar's Gunter. Andreas Schager fits the bill perfectly as Siegfried, showing that attention to the characters and their reactions to this scene are critical to the charge of the scene. 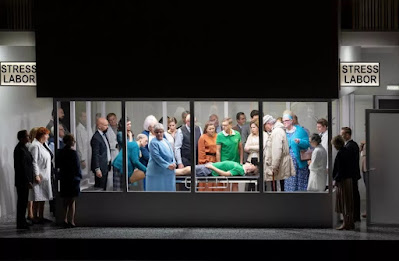 This takes place in the "assembly room" of the testing centre, which stands in here for the Gibichung Hall, and for the first time, it struck me as similar to Lohengrin's playing out of tragedy and betrayal by those who would see themselves as leaders or upholders of laws as a wider act that affects/involves the public/the nation. Whether that was intended or not, it does enhance the effectiveness of the scene. I also actually liked the baseball team locker room as a stand-in for the "hunting" scene that leads to the death of Siegfried. The gossip and toxic attitudes expressed suited the context of the scene and the death scene was genuinely touching and dramatic. Likewise the mourning gathering appearance of the old lady Norns, Erda and the Wanderer sufficed as a moving substitute for the usual theatrical conclusion of conflagration and immolation.

Overall then, this was a good Das Ring des Nibelungen at the Staatsoper unter den Linden, particularly as far as the musical performance and the majority of the singing were concerned. As far as Tcherniakov's science laboratory experiment is concerned, the only worthwhile experiment here, whose results are indisputable, is the force of Wagner's music to carry mythology, narrative and opera in service of something so powerful it resists time and fashions, something capable of renewal and reexamination of its meaning which remains a remarkable piece of art and culture, something that indeed has created its own mythology around it. It's been "stress tested" again, this time by Dmitri Tcherniakov, and The Ring still endures.